When Fuller Center for Housing founder Millard Fuller died in 2009, it was quickly decided that his dream of making sure that everyone had the opportunity to own a simple, decent home should be kept alive.

Where better to ensure that dream was kept alive than by going back to the place where Fuller was born and holding a blitz build in Lanett, Ala.? And, so, the annual Millard Fuller Legacy Build was launched.

With the construction of six new homes and Greater Blessing repairs made to eight others, the Chattahoochee Fuller Center Project helped launch an annual building blitz that has since transformed communities in Indianapolis in 2010 and Minden, La., in 2011. This year, the Legacy Build will be divided between the Greater Blessing hub of McDonough, Ga., and the new home construction site in the mountain village of La Florida, Peru. 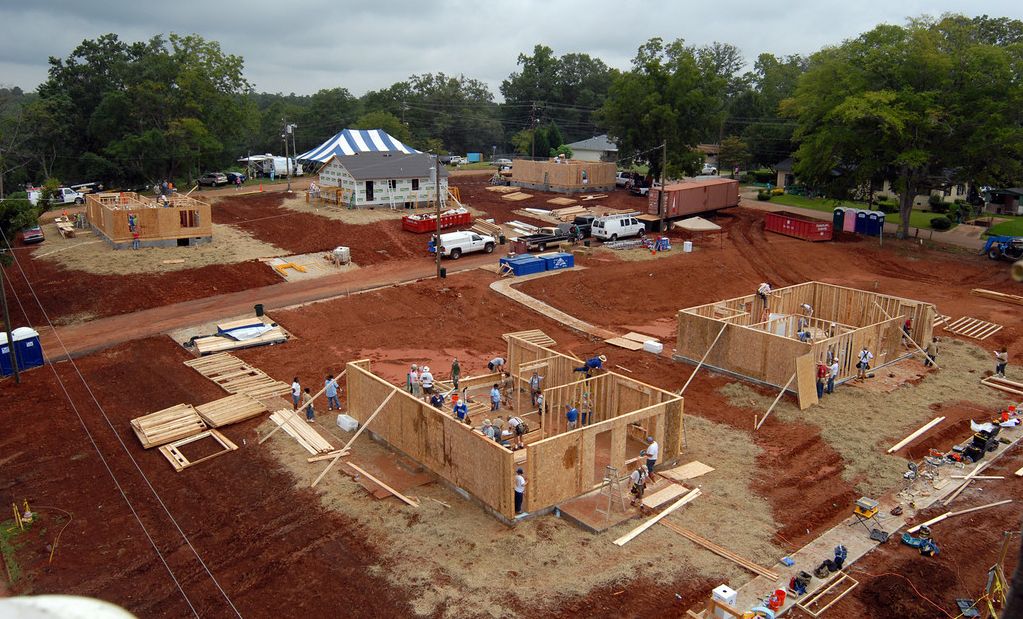 Like McDonough and La Florida, Lanett benefited from The Fuller Center’s work well before the Legacy Build began. The Chattahoochee Fuller Center Project already had built 17 new homes before the hundreds arrived in late August of 2009 to celebrate the life of Millard Fuller by doing what he loved best — building homes and changing lives.

Fuller Center President David Snell said Fuller would have loved the 2009 scene in Lanett but that the Chattahoochee group already had made him proud when they took up “The Theology of the Hammer” in 2007 and came out swinging.

“That’s where he was born and raised,” Snell said. “To have a group come forward and want to form a Fuller Center there was very exciting to Millard. And then to be able to go back home and build some houses, it was like a dream come true for him.”

With wide support from the community, the Chattahoochee group continues to build upon Fuller’s dream. Next week, they intend to pour concrete slabs for what will become the 28th and 29th new homes built in Lanett and adjacent West Point, Ga. The two homes will be constructed just a couple hundred yards from the site of the first Legacy Build and will add to an already remarkable neighborhood transformation that began five years ago.

“We have been able to change 27 families,” said Kim Roberts, Chattahoochee’s busy family partnering coordinator, who is perhaps even more involved in helping families after they receive their Fuller Center homes. “You see the kids’ lives change. They’re proud to bring their friends home with them. They’re not ashamed of where they live or how they live. They have decent, affordable housing. It brings the esteem of the parents up. It improves the neighborhood and the community. It makes the other people around The Fuller Center houses want to upgrade their houses to the same standard.”

“Chattahoochee Valley is one of the most successful covenant partners in our enterprise,” Snell said. “They are consistently building. With the population base that they’ve got there, they’re far and away the most productive operation we’ve got.”

Chattahoochee gets a tremendous amount of support from its community and has a key partner in InterCall, a communications services company that employs more than 600 people in its West Point call center, which is in the midst of a $30,000 fundraising campaign to sponsor home No. 28.

Fundraisers include beauty pageants on June 9 (one for girls during the day and a lighthearted “womanless” pageant in the evening, a golf tournament June 22, a softball tournament in August, a bowling tournament and a motorcycle ride. And every Monday during May and June, employees earn the right to dress casually with a one-dollar donation to the house campaign.

Of course, getting the backing of InterCall was a bit of an inside job. The company was launched by ITC Holding Co., whose president at the time was Bill Scott. Scott also was the first president of the Chattahoochee Fuller Center Project.

“When he got involved with Millard, he got us very involved,” said Molly Fulghum, InterCall’s senior director of operations for North America. “It’s been very good for InterCall. The team building has just been phenomenal for our company. And, this year, with sponsoring this home, it’s allowing our team members to work out in the community because they’re doing these community fundraisers, and it’s giving everyone at InterCall a chance to not only work with each other but to work with the community, as well.”

Scott has retired, though Fulghum says he is not one to rest on his laurels. That drive that makes it hard for him to consider a leisurely retirement is the same drive that helped make InterCall the success it is today and helped make the Chattahoochee Fuller Center Project a real difference maker in the community.

“He’s the type of person that you want to work for,” said Traci Crosby, the manager of InterCall’s automated department in West Point. She began working with Scott and The Fuller Center in 2007 and has served as Chattahoochee’s volunteer coordinator since 2008. “He’s very down to earth and very level-headed. When we would get down in the dumps about things, he knows. He’d shoot you an email or text message just to bring you back up. He’s very faithful in his Christian faith. He’s the rock to this foundation.”

Snell echoed the sentiment about Scott’s laying the foundation for success.

“Bill Scott is a fine, fine gentleman,” Snell said. “He had the vision. He was a friend of Millard and knew Millard and believed in what Millard was doing. These organizations, when they begin, the successful ones always start with a visionary, someone who has the dream. Bill Scott had that and was able to share that and get other people engaged. He was the stone upon which that foundation was built.”

ADDING FUEL TO THE FIRE

Scott did not pull only his InterCall connections into the mission. He helped get the entire community behind it. And his knack for matching people with situations in which their skills will allow them to flourish is what brought Kim Roberts into Chattahoochee’s fold, adding the gasoline to Scott’s fire.

Roberts is a double-amputee who lost parts of both legs at age 4. After 25 years in the business world, she decided to go back to school and train to become a nurse so that she could more directly serve others. While working in a hospital, she developed circulation problems that led to the removal of several more inches from her right leg. Sitting in a wheelchair does not suit her well, so she prayed and asked for the opportunity to walk again and to serve. She got both.

And the Chattahoochee Fuller Center Project got way more than a family partnering coordinator. They got someone who helps homeowner partners manage their finances, offers a shoulder to cry on, prays with families and brings them joy. Standing between houses built at the 2009 Legacy Build, she points to No. 19 and sounds like a proud mother as she describes how homeowner Lisa Trammell has become a team leader at the Duracell plant in nearby LaGrange. 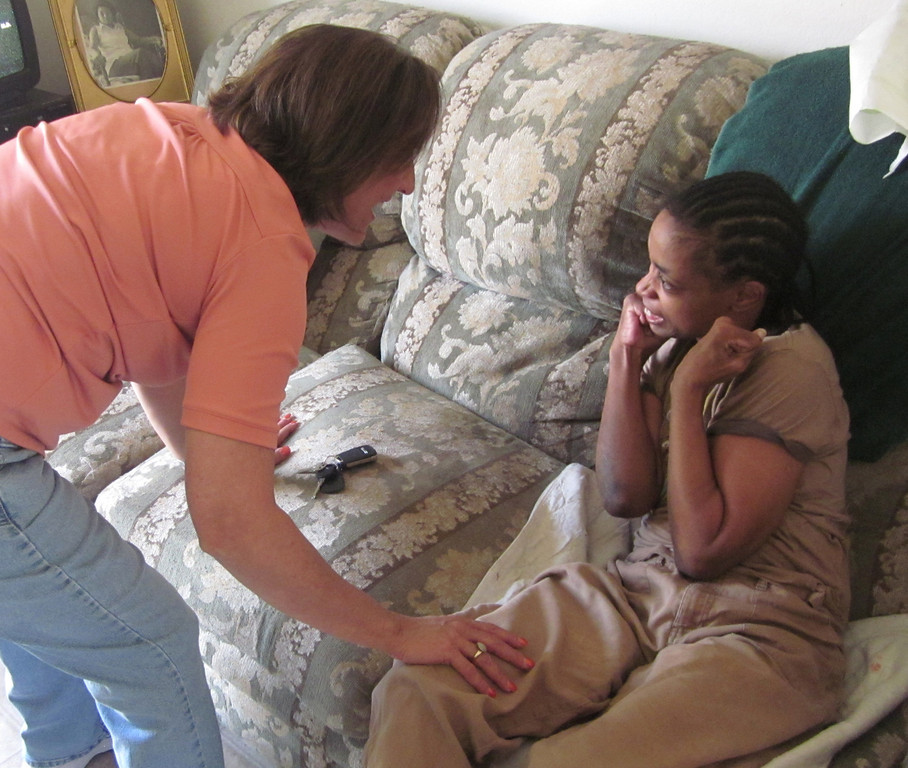 She then turns to the house she just left, where she had paid another visit to homeowner Mattie Murphy’s crippled daughter, Jennifer, who suffered permanent brain damage from oxygen deprivation during a heart attack years ago. She emotionally recalls when the family moved into their new Fuller Center home and Roberts helped Jennifer take her first shower in years. Her misty eyes then clear and sparkle as she talks about going shopping with the blind homeowner two doors down. “I tell her, ‘You be my legs, and I’ll be your eyes,’” she says with a smile.

Roberts says her tireless efforts come from the joy she gets from giving, the true greater blessing, and from the inspiration to serve that she got from Scott.

“He is the most wonderful, giving, caring man I’ve ever met in my life,” she said. “He’s a great mentor and willing to do anything for anybody. And we need more people in the high corporate world just like him. You’ve got to have somebody to take charge, you’ve got to have that leader. Millard was the leader for The Fuller Center at headquarters, and Bill Scott was our leader for the Chattahoochee Fuller Center. He got us all on board, and we cared so much about him and his efforts that we wanted to give back 100 percent to him.”

“Kim Roberts is a princess of a woman,” Snell said. “She’s a person who has overcome personal handicaps and has a strong sensitivity for families in need. She’s probably as good of a family relations person as you can find.”

Crosby and Roberts will be among those who converge on McDonough, Ga., for the fourth annual Millard Fuller Legacy Build in September. Though their focus is on improving their own community, they look forward to celebrating the legacy even when they’re not in their own backyard.

“I love it everywhere I go,” Roberts said. “It may be more special here because of Millard, but when I go out of town to the Legacy Builds, I get very excited there also. It’s the same kind of feeling. You’re just helping somebody else in a different town. But it’s all about helping the next person.”

They would like to see this year’s Legacy Build be a spark for Henry County to build upon in the future and lead to the kind of community involvement they see in the Chattahoochee Valley area. 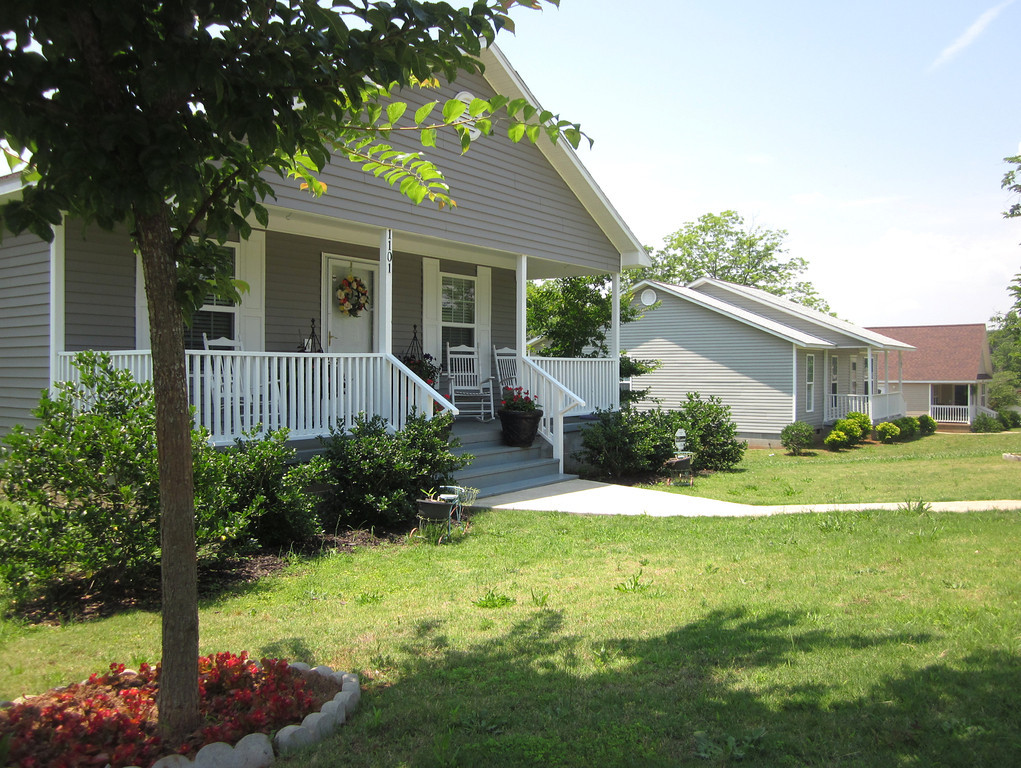 “The volunteer efforts have been very overwhelming, especially churches,” Crosby said. “We’ve got a lot of local churches involved. We’ve got a lot of outside help that comes year after year for our builds. We actually have people contacting us from different colleges and universities wanting to get involved in this area because they see the impact that The Fuller Center’s made in the area.”

Then again, it could just be something in the water that explains the success in Lanett and West Point, something in that gently flowing muddy Chattahoochee River.

“It’s because of the community here,” Crosby said. “People pull together, and no matter how hard their life is, they’ll pull together and help with a fundraiser because they’re helping someone else.”

That community spirit surrounded Millard Fuller from the day he was born in Lanett (Jan. 3, 1935) and all through his formative years.

“I think he was the way he was because of Lanett,” Roberts said. “Lanett’s a special place. I just wish I could consume some of that energy that I hear other people talk about that he had.”

Roberts never met Fuller, but she feels his presence. So does Fulghum, who got to know him through InterCall and through an even closer connection. Her father and Fuller were cousins who grew up together.

“His energy was just amazing,” Fulghum said. “And it still is amazing. I feel like he’s still here with us. His ability to engage people and make you feel like you’re the one person in the room was a gift that he had, along with an energy that was almost bigger than life. So I think everyone was really drawn to that energy and wanted to get in there and make a difference. And he always had a vision. He had that vision to change people’s lives, and that was infectious in a very good way.”

Click here to learn more about this year’s Legacy Build.

View this video report from The Chattahoochee Fuller Center Project: