At the 2011 Millard Fuller Legacy Build in Minden, La., one voice stood out among the hundreds. Of course, Charlie Park has an unfair advantage because that deep voice tempered by a gentle Southern drawl was cultivated in the world of broadcast journalism. And if anyone ever had the perfect radio voice, it’s Charlie Park.

On Aug. 31, Park will step down as executive director of The Fuller Center for Housing of Webster Parish, although he will continue to lend his wealth of experience to the covenant partner on a part-time basis and will be there in September when the CP begins raising the walls on its 50th house in the 50-day Golden Blitz that begins on Sept. 27. The foundation for that project has already been poured.

“It’s a great way to go out, and I’ll be involved with that in some respects, but not very much,” Park said Tuesday, Aug. 21, when the humble leader agreed to be the subject of a question-and-answer session for our latest volunteer profile on the condition that it could be used to inspire others to give or volunteer.

What is your background with the affordable housing movement, from Habitat to Fuller Center years?

We started in 1991. I was working here in Spring Hill, La., and had been married to my wife, Dee, for about five years. Dr. Charles Payne invited me to come out to the work site one Saturday. I did. And for eight years, I volunteered. Then in 1999, we were walking out of church one Sunday night, and he said, “If we had the position of executive director, would you be interested?” I thought about it for about five seconds, and I said, “Sure!” It was really at a time when God was leading me to something else, and this was it. It’s been marvelous ever since.

It’s well-known you are a man of deep faith. Has working so hard with this movement strengthened that or tested it?

It certainly deepened it. It has helped me grow in the understanding of what Jesus wants us to do in this life. And because of that, I think my faith has really deepened.

There are millions homeless and in substandard housing. Why do this when you can only build or repair one house at a time?

It’s the starfish story. Walking along the beach, a man picks up a starfish and throws it back to sea. There are hundreds, maybe thousands of starfish on the beach. And this guy throws one back into the ocean. A man walking toward him asks, “Why did you throw that starfish back in there? There are hundreds, thousands maybe. What difference does it make?” And the man said, “It made a difference to that one I just threw back.” We may never win the fight, but we’ve certainly got to try.

Do you have a favorite memory?

There are so many. One of the neatest things that happened was back in the Habitat days, 2005, when we did a blitz build with Country Music Television. Trace Adkins, the musician, came in for a day; he’s a Webster Parish native. We built a house in two weeks. We could have built it in a week, but we kept stopping and going back and re-shooting things. We actually had to rebuild some things. It was a really interesting build. Right after that, I went off to Michigan for the Jimmy Carter Work Project, and that was a great, great memory. I really remember marvelous times with Millard. We had a Red, White & Blue Build in 2008, and Millard came in. I went over to Shreveport to pick him up. We were walking through one of those two houses that was almost finished, and Millard walked through and turned around and said, “Charlie, this is great!” I’ll never forget that moment. To know that what we’ve been doing pleased him, that’s important. But the high point was last fall with the Legacy Build. Awesome. Happy moments? It’s just been 13 years of happy moments. And before that, with eight years as a volunteer, it’s 21 years of happy moments. 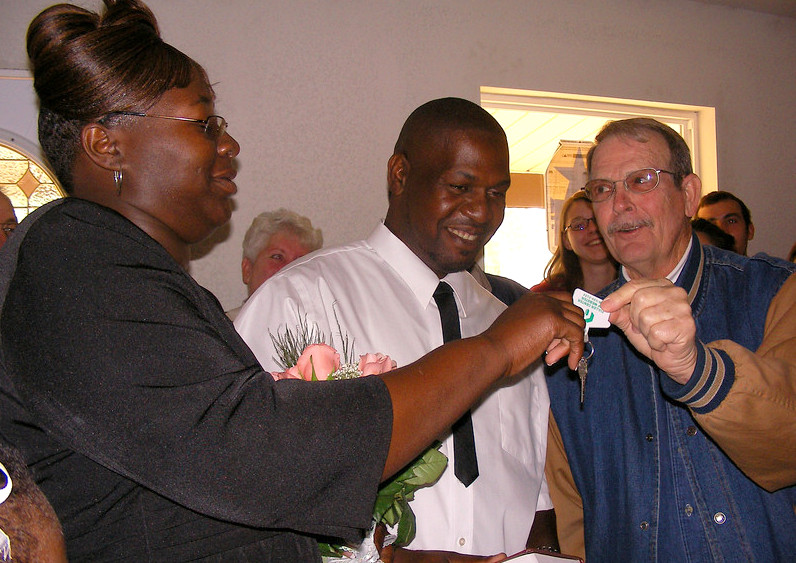 What’s the best part of leading a covenant partner?

The joy of seeing a family being able to move in and realize their dream of having a home of their own. That’s the best part. And right behind it is seeing a homeowner pay off their mortgage. And that’s happened with us several times. But it’s the joy and the thrill of home ownership that happens with the family, those are the best times. And we see that many times at dedications. But sometimes, it’s three or four months after the dedication when you’re visiting with the family and they just break down and tell you how much they love being in their new home. So it’s the reaction of the family and the joy that it brings the family.

It’s a two-pronged sword. We just finished our annual round of applications. We now have 62 applications for new homes and four applications for rehabs. What we have to tell everybody is that we’re limited only by the amount of money we’ve got and the number of volunteers that we can muster up. So it’s a two-pronged problem. That’s the toughest challenge — raising enough money to do the job, do the work of the ministry that we’ve been called to do. And to find the volunteers who are willing to help and stay with us.

What’s next for Charlie Park?

Since I basically announced my retirement, our covenant partner has kind of rethought things, and they’re going to keep me on as a part-time person, and I’m going to manage the homeowner mortgages. I’m going to continue to love on my families and help them get their mortgages up to date and keep working with them to be the best homeowner possible as far as the fiduciary responsibilities. But strictly on a part-time basis, six or seven hours a week maybe. Dee and I are going to travel. We are going to recommit ourselves to a couple of local ministries, and we’re going to enjoy some time together. … I’m going to try to use the time that I have left on this earth to love my wife and let her know how much I’ve appreciated her for all these years.

Do you have any particular travel stops planned?

Dee has never been to Wyoming, Nebraska, Utah. We’re going to fly to California and visit with some friends at First United Methodist Church in Loomis, California, a marvelous volunteer team that has come to our covenant partner for six straight years and helped build six houses. We’re gonna fly out in October and visit with them, then we’re going to drive back cross-country through Nevada, Wyoming, Utah, Kansas and then on home. That’s already on the books. We have a bucket list. We want to go back to New York. Dee loves skyscrapers. She is awed by and enamored with skyscrapers, so we’re gonna go back to New York to visit and see some plays. Then we’re probably gonna go to Michigan. We love Michigan. We went to Hawaii last year after the Legacy Build, so I’m not sure we’ll go anywhere that far again, but we’re certainly gonna visit some wonderful places here in this grand country of ours.

I’m just thrilled that things are looking up for us, and I pray that God’s blessings will continue to just shower down upon The Fuller Center for Housing.