As writer, it pains me to admit that, indeed, sometimes a picture is worth a thousand words. A picture can be snapped, edited and posted for the world to see in less than a minute these days. But even with all this newfangled technology, we writers still can’t come up with a decent thousand words in less than a half hour.

I ran into this a lot in the newspaper business. As a sportswriter, I’d cover a football game for three hours, get postgame interviews, write a story, take call-in reports, edit other stories and sometimes design pages in hopes of getting out of the office by 1 a.m. Meanwhile, a TV cameraman would show up at the game for a few minutes in the second quarter, air 20 seconds of footage from the game on the news (after calling the paper to find out how the game ended) and get showered with appreciation for their coverage. All we’d get was a call to point out there’s a comma splice in the 17th paragraph and a complaint that we shouldn’t have mentioned Jim Bob’s three fumbles that cost the game. 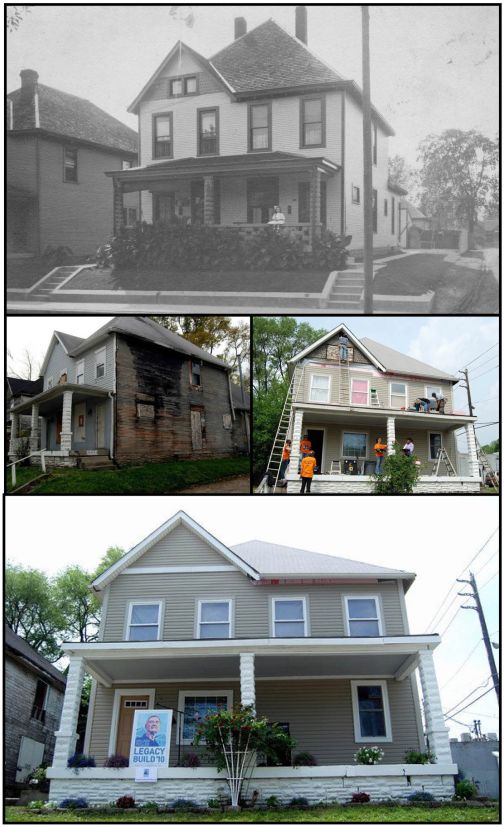 But sometimes a visual works best. We’ve been able to explain our Save a House/Make a Home initiative in plenty of words and a few simple photographs. But even our best photos tell only part of the story. We can easily show a house in a terrible state of disrepair and easily show how we’ve restored it into a simple, decent house for a good family.

What we haven’t really thought about showing, though, is what the house was like long before it got into its terrible state. We haven’t thought about it because that’s almost impossible to show. Many of these homes are abandoned, sometimes many owners down the line from its glory days.

But we recently got a photo estimated to be 100 years old that took the life of one of our restored homes full circle. It’s of a home on St. Paul Street in Indianapolis, home of the 2010 Millard Fuller Legacy Build. One of The Fuller Center’s followers on Facebook, Scott Simpson submitted the photo estimated to have been taken in 1910 and showing his grandmother as a little girl sitting on the front porch of a beautiful two-story home that was a duplex in the first half of the 20th century.

Somewhere along the line, the house fell into such disrepair that it was in danger of being torn down. We had those photos. And The Fuller Center restored it to its long-lost glory, something Scott realized only a couple of months ago after stumbling across our photos of its completed restoration.

Our Save a House/Make a Home initiative is a practical way to address America’s foreclosure crisis and the problem of people needing affordable housing. We bring these two issues together in a way that benefits families in need, banks, neighborhoods and the housing market in general. Banks are able to shed properties they consider “toxic”, we fix them up, families move in and take care of the home, and neighborhoods are resurrected and rid of the problems a glut of vacant and unappreciated homes can bring.

But this house on St. Paul Street is a reminder that not everything about our Save a House/Make a Home initiative is practical. Houses aren’t just a collection of boards and bricks that provide shelter. The walls are blanketed not just with layers upon layers of paint, but with memories. Every house has a story.

This two-story house is actually a many-story house in Indianapolis. And, thanks to Scott’s sharing of this old photograph, we have a visual reminder why there are reasons beyond the practical for saving these houses.

It’s a program born of present circumstances to build a brighter future while preserving someone’s precious past.

Learn more about our Save a House/Make a Home program here.

Your donations make these transformations happen! Thank you!