Wednesday was day two for the California/Oregon team working on one of Fuller Center Webster Parish’s two 5th anniversary build houses. The small group of mostly-experienced volunteers finished the walls, installed half of the windows and raised several roof trusses on a half-acre plot of land in Springhill, La.

The project is being led by Garvin and Betty Jabusch of Loomis, CA. Garvin, 80, is a veteran of construction who has taken a great interest in building eco-friendly, energy-efficent, sustainable homes.

"Don’t use the term ‘green’ regarding these houses," he said. "That’s not descriptive enough. What’s happening is that these people are seeing their energy bills cut in half and we are saving money in the construction process by not wasting anything." 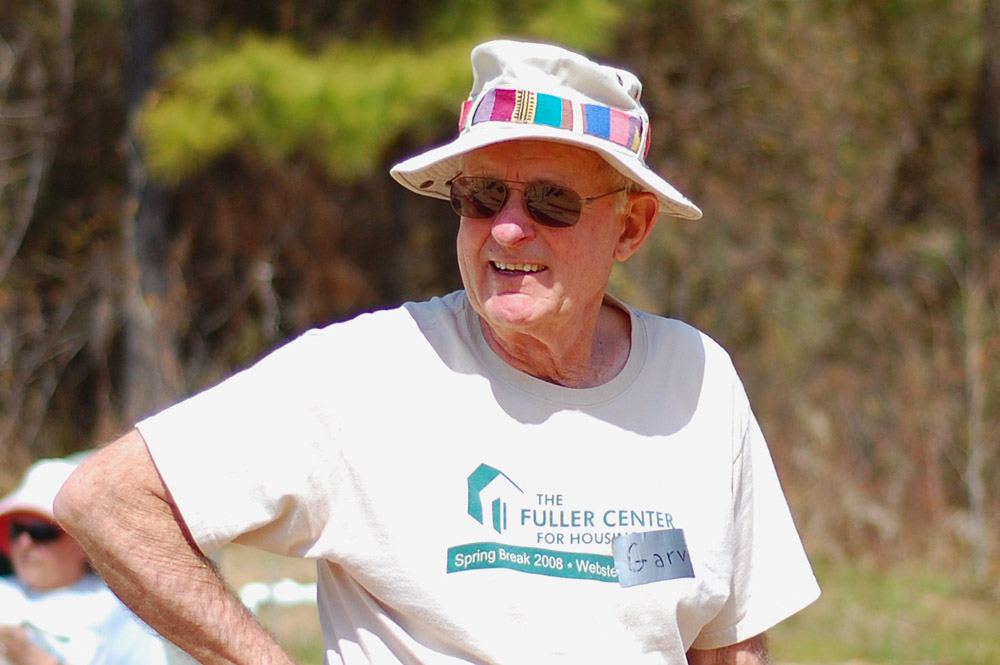 Garvin instructs his volunteers to re-use scrap wood whenever possible. He also has people drink from re-usable water bottles on site to cut down on styrofoam and paper waste. But building a sustainable house is not just about double-pane windows and extra insulation. Garvin strives to use materials not made from oil. Asphalt shingles and vinyl siding are out. Instead, his team uses hardy board on the side of the house and a metal roof made from recycled cars.

Garvin’s reasons for his building methods are practical. "I guess you could say that those of us who grew up in the Depression are frugal," he said.

The 1,100-square-foot, two-bathroom house is the fourth built in Webster Parish by members of the United Methodist Church in Loomis, Calif., where Garvin gets most of his volunteers. All four have been similar energy-efficient homes.

The 5th anniversary house is for Travis and Brandi Page, who both spent most of the day at the site. Brandi recently had ankle surgery and was therefore only able to take pictures and chat with volunteers while Travis worked all day on construction.

For Brandi, she wasn’t just shooting photos for personal reasons. She is attending school to get a photography degree and plans to open her own studio as soon as possible. She recieved a full scholarship to an online program of the Art Institute of San Francisco based on her portfolio and already has a small business on the side. She charges her customers only what they can pay, if anything.

"I’m just trying to help everyone out," Brandi said. "I do photography for people who can’t really afford a photographer for their wedding or portraits."

Brandi and Travis currently live in a one-bedroom apartment. When a customer comes by, she has to move the couch and rearrange the living room to set up her studio backdrop and lights. Not only that, but the apartment is so small that the couple’s four children can’t live permanently with them. They are split up among other family members until the Fuller Center house is complete.

"I am so excited. I am so ready to have everyone back together," Travis said, reiterating his enthusiasm throughout the day. He was one of the last to leave the site, thanking the volunteers and helping to clean up. He joked that he tried to get Brandi to camp out on the slab in sleeping bags because he just wants to be be there.

"The boys (Colton, 9 and Zach, 7) already came out to play on the slab," said Brandi. "They’re outdoor kids. This location is perfect for their dirt bikes."

The wooded location is also perfect for outdoor photography. Brandi already has plans to use some of the yard to plant flowers, build a small path and a bridge for staging portraits. She also looks forward to being able to host family visits, something that isn’t possible in a tiny apartment.

"I’m happy that we’ll be able to walk outside and sit on the porch without anyone seeing us," she said. "Where we live now, there are men who stand around outside drinking all day. When you walk by, they whistle. You don’t even want to go out your own front door."

Garvin and Betty will remain in Springhill with most of their team until next Thursday.