Butler University may be best known nationwide for their men’s basketball team’s having been the Cinderella story of the 2010-11 NCAA Tournament as the Bulldogs shocked experts as they fought off favored teams all the way to the championship game before falling to Connecticut in the final.

But around the 4,500-student university’s home of Indianapolis, Butler is best known for turning out well-educated students who have been instilled with a strong sense of volunteerism that they carry well beyond their college years. So it is no shock that a group of 90 incoming Butler freshmen — and mascot Butler Blue II — are volunteering today in the Indianapolis neighborhood of Fountain Square that has been utterly transformed by the work of The Fuller Center for Housing there.

“They like to get students out into the community, and it’s part of their mission that when a student graduates from Butler University they will work and continue to volunteer,” Central Indiana Fuller Center President Chuck Vogt said this morning while standing in front of a large Fuller Center sign on St. Paul Street as he awaited the students. 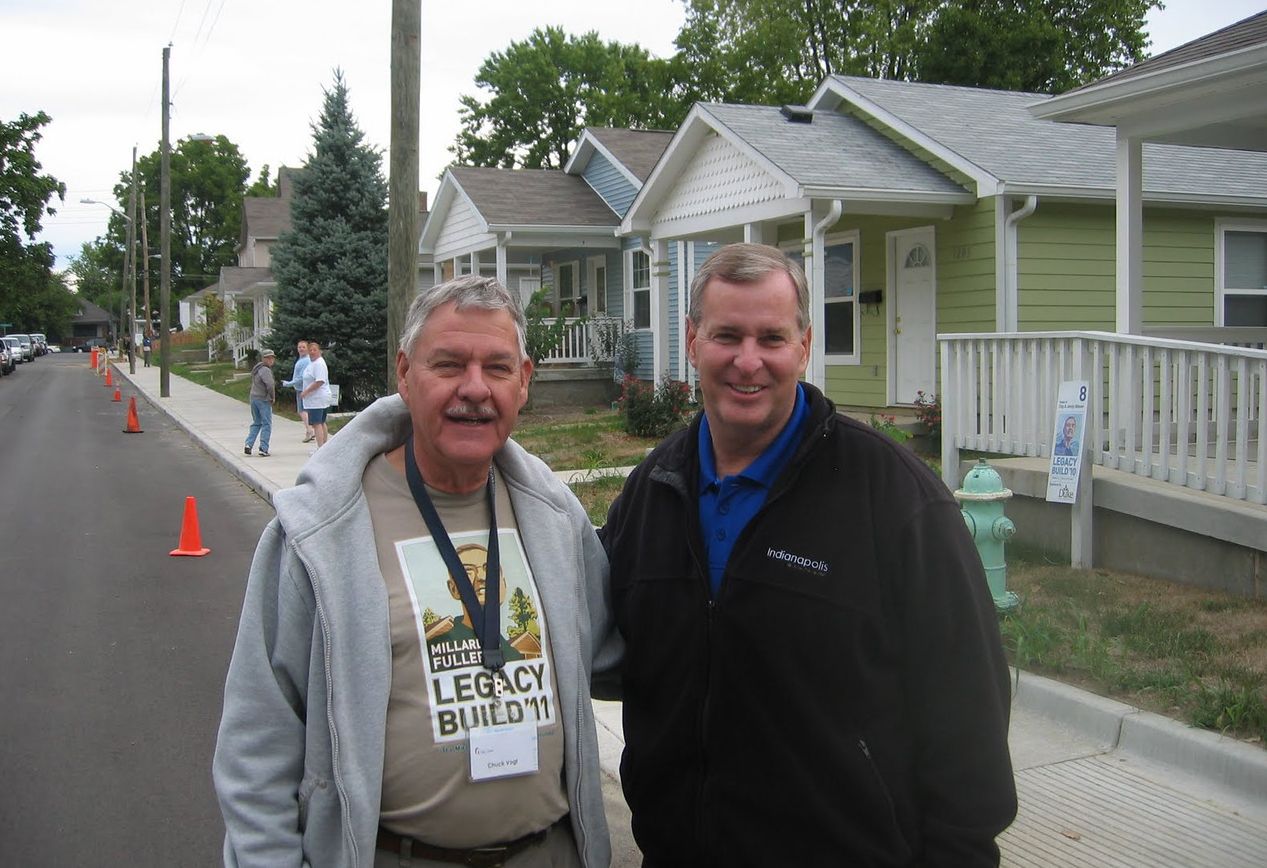 The Fountain Square neighborhood was once a crime-ridden area where residents once cowered in their homes and refused to let their children play outside. Now, the sounds of gunshots have been replaced by the laughter of playing children as their families sit and talk on front porches.

The Central Indiana Fuller Center’s transformation efforts there got a huge boost when it was chosen to host the Millard Fuller Legacy Build in 2010. Since then, the improvements have only grown with the 14th and 15th new houses scheduled to be build during a two-week build Sept. 10-21. The build will be The Fuller Center’s first on Villa Avenue, a couple of streets over from St. Paul, where The Fuller Center’s work began. Today’s clean-up effort is connected to the growth of this resurrected neighborhood of proud residents.

“ Up to this point, we’ve concentrated on St. Paul Street,” Vogt said. “By moving over to Villa, we’ve expanded our neighborhood. So these Butler students are going to go down St. Peter Street, St. Paul Street, Churchman Avenue, then go down Harlan Street and then go down Villa.

“They’re going to go down these streets and pick up trash, bottles, paper stuff, limbs on sidewalks,” he added. “There are also alleys that go behind these streets, so they’re also going to go down the alleys, and that’s where most of this trash is. We’ve got a handicapped family on St. Paul Street, and they’re going to clean up his yard and pull weeds from his yard. It’s just major spruce-up and clean-up of our neighborhood.”

While the always upbeat and jovial Vogt is clear on the students’ jobs today, he wasn’t as sure when asked what the dog will be doing.

“The dog will probably be peeing in somebody’s front yard,” he said with a laugh. “Hey, you asked!”

Click here to read more about “The Miracle on St. Paul Street.”