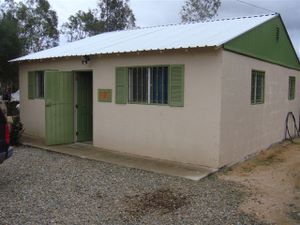 It was just a month ago that the earthquake devastated Haiti, an impoverished place ill equipped to deal with the disaster.  Since then emergency crews, including hundreds of doctors, nurses and first responders from the US and around the world, have worked with remarkable dedication and sacrifice to restore some measure of order.  The stories coming out of Haiti have been heart wrenching, and given the social and economic conditions that existed there before the quake many have wondered if recovery is even possible.

The Fuller Center for Housing is an organization based on biblical principles, and we harken to Paul’s message to the Corinthians: “And now abideth faith, hope, and charity, these three. . .”  There is power in these few words, though Faith and Charity, or Love, seem to get most of the attention.  We consider ourselves to be faith driven, and that faith is renewed time and again when, after doing all that we can do, the Lord steps in to help finish the task.  We are a loving organization as well, providing our many donors and volunteers a tangible way of expressing the Lord’s admonition that we love one another.

With the Haiti Project we will be focusing on Hope.  There is an opportunity in this tragedy for the people and leaders of Haiti to create a better country out of the ruins.  Haiti doesn’t have to continue its history of poverty and despair.  We must hope that the tragedy visited on this place can provide an opportunity for things to improve.

The rebuilding efforts will bring millions of dollars into the country.  If those funds are used wisely they will produce hundreds of thousands of jobs, and jobs provide dignity—and hope.  Haitians are hard working when given the opportunity to work, but the situation there has denied too many that simple opportunity for too long.

House building is a powerful economic engine.  In our own country we have seen the house building sector lead us out of economic doldrums time after time.  The Fuller Center builds houses, and our goal in Haiti will include providing as many jobs and as much economic stimulus as we can.

Doing this, of course, will require the generosity of many.  We have been greatly encouraged by the support we’ve received—it gives us hope!  One exciting development has been the number of churches that have come forward to sponsor a house and offer support.  With a sponsorship cost of $3000 most any congregation can be a part of rebuilding Haiti—a congregation of 100 need only raise $30 per member!  There are over 400,000 churches in America—what a contribution it would make to building houses and hope in Haiti if each one sponsored a house (or two, or three!)

You can find a clip of the 3-D house plans on our Haiti page.