“If you ask God to move a mountain, don’t be surprised if He hands you a shovel.”

There are many variations of that statement, often linked to Luke 17:5-10, among other gospels. The simple message is that God can work miracles through your faith, but He may require a bit of spiritual “sweat equity” — to use familiar Fuller Center for Housing terminology.

Poverty housing definitely is one mountain of a problem in the world, and its elimination would be a miracle of Biblical proportions. But eliminating poverty housing is exactly what Millard Fuller set out to do when he and wife Linda launched the world’s affordable housing movement, preaching his Gospel through the “Theology of the Hammer.” That vision continues to drive Fuller’s final ministry, The Fuller Center for Housing, today as much as ever.

That mountain of a vision has been wholly embraced by Jim Killoran, Executive Director of The Fuller Center for Housing of Greater New York City. Whether God handed him a shovel is unknown, but Killoran has handed many people a hammer to work toward that goal. Many of those who have swung hammers in that effort began as youth through the Builders Camp he launched years ago and that is going strong today, even in this unusual summer.

“The goal is to teach kids that a hammer is a tool that they need for their life and that they can also end poverty in their lifetime,” Killoran said Wednesday from his office in New Rochelle, N.Y., where he was helping coordinate volunteer response to damage from Tropical Storm Isaias in addition to overseeing the annual summer Builders Camp.

“I was praying about it today,” Killoran added. “I said, ‘Let Generation Z be the best builders the world has ever seen with The Fuller Center and the mission to end poverty in their lifetimes.’ That’s my goal of the Builders Camp.”

And it’s a goal that he explicitly conveys to the campers and his younger volunteers.

The Fuller Center of Greater New York City’s Builders Camp is actually nine separate weeklong sessions throughout the summer with this week being the middle session. Because of the coronavirus pandemic, they have had to limit the number of campers who can participate while also instituting numerous safety protocols such as mandating mask use and social distancing. The camp was deemed too important to the mission to cancel outright.

“If you plant that seed of community service at an early age, then kids will do it for the rest of their life,” Killoran said. “That’s what we’re trying to do.”

Besides, he said, a volunteer who is turned away may be lost forever.

“I try to never turn a volunteer away, because once you do they go to another organization,” he said.

He added that the camp fees also raise money for their work. Meanwhile, he has seen many people who start out as volunteers ultimately become financial supporters.

“They become donors, too, although that’s not the reason we do it,” Killoran said. “One of the kids who did our Builders Camp in ninth grade, his family became our biggest donor.”

The youth in this year’s Builders Camps have been tackling a multitude of projects but have especially honed their skills building planters, benches and picnic tables to donate to urban areas that have no green space. They also sell them in the group’s ReUse Store to help raise even more funds for the mission.

Working primarily in Westchester County where building and property costs are extraordinarily high, Killoran’s team has stretched its focus beyond building and restoring homes. The benches, planters and tables are visible components of the group’s “NMU” efforts. 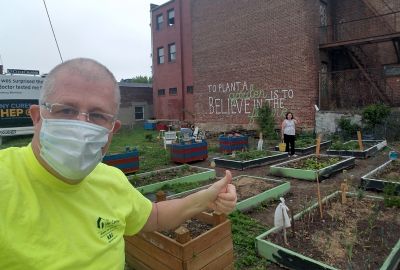 “I want every neighborhood to be what I call NMU — no more ugly,” Killoran said. “No neighborhood in this country should be ugly for any kid. You can change a neighborhood in a day with a hundred people. You can take a zombie house and you can make gardens and make benches and work on the house, too.

“I’m big on community gardens because in a lot of neighborhoods kids don’t have healthy food,” added Killoran, who said they have about seven community gardens in addition to “pocket parks” carved out of vacant lots and eyesores. “There are no trees in some of our urban areas, which is a horrific inner-city characteristic. As we put these planters around, it makes a big difference and people love them. And they can also be vegetable planters.”

While the pandemic has limited numbers of participants this summer, it has led The Fuller Center of Greater New York City to respond to one problem by creating a new opportunity. This fall, they are planning to launch an after-school version of Builders Camp.

That means that some of the skilled construction leaders who make these summer programs possible will be needed to continue providing supervision and training throughout the year. Fortunately, finding such leaders has not been a problem.

“I have very good people who have been with me for 12 to 18 years who are phenomenal teachers,” Killoran said. “It’s hard to get someone who is a good construction worker who is also patient. I’ve been blessed to have a lot of those people stay with me.”

In his experience, Builders Camp participants often come back to volunteer. Some even go on to become the kinds of skilled leaders upon whom he depends.

“The high school kids become a volunteer base,” he said. “So, they can learn at the Builders Camp, and then they can volunteer. If they want, they can continue to help on what I call my A-Team. The A-Team are my high school kids who have helped me for 30 years who stay with me. If you’re on the A-Team, the goal is to end poverty.”

That simple goal keeps the young volunteers engaged and eager to pick up a hammer — or a shovel if needed.

“The kids love to come back,” Killoran said. “And they get it.”