Not many psychologists would be proud to admit an addiction. But Maine resident Brenda Sawyer is.

“I’m addicted to volunteering!” she proclaims.

Indeed, her list of volunteer efforts is long and includes global building trips with both The Fuller Center for Housing and Habitat for Humanity as well as providing psychological support in the wake of natural disasters.

She sat down for a moment this morning to chat about her volunteer efforts. 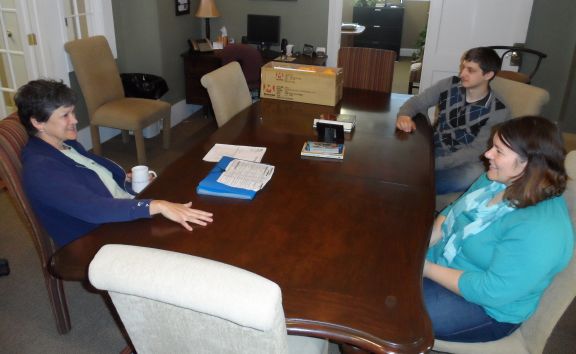 So, you’re “addicted to volunteering.” What else does that involve besides building homes?
Well, I’m a disaster mental health volunteer with the Red Cross. We go to natural disasters and support the other volunteers as well as the community. I’ve been on 11 national disasters. I’ve been to floods, tornadoes. I was in Joplin, Missouri, right after the tornado hit there and wildfires in California and Colorado. And we had some major flooding in northern Maine, so I was able to help my own community, which was nice.

You do a lot at home but also globally. Why do you go to places like Nicaragua, Haiti and Nepal?
Because I love meeting people from other cultures. I want to expand my view of the world. Nicaragua was my very first Global Village experience with Habitat. It was the first time my husband and I had ever done anything like this. I realized that, number one, what a privileged life I led. I’d never been exposed to poverty like that and really had a little emotional breakdown at one point because I was just so overwhelmed by the poverty. So, when I lead a group, I have to remind myself that anyone seeing this for the first time, you really have to look out for them because they may not be showing it outwardly. When I went to Haiti, I brought three friends who had never been exposed to anything like that and they really were struggling. Not that it doesn’t affect me, but it doesn’t affect me the same way as the first time. So I have to remind myself that people are seeing this for the first time. You never get used to it, and it’s never not heartbreaking to see that kind of poverty, but there’s not the shock anymore.

What ultimately drives you to volunteer?
First of all, it’s not totally altruistic, obviously, because I get something out of it. I like working with other people in cooperation to get something done. I like it more than doing things by myself. I don’t do repairs at my own house, and then I get together with these people building someone else’s house. There’s just something about community, working together to better someone’s life.

So you’re semi-retired now?
I have a contract with the state of Maine, and I review claims for Social Security disability. I gave up my psychotherapy practice so that I could travel more. … That’s why my volunteer work has to be meaningful — because I’ve given up my individual therapy work, which was very satisfying on an individual basis. So, now, I work enough to support my habit (volunteering).

Tell us about the Nepal trip (Oct. 19-31).
It’s going to be an adventure. Other than Haiti, all the other builds I’ve been on are mostly Spanish-speaking countries. And I’ve never been to Asia, so it’s stretching out.

So you speak Spanish fluently?
I wouldn’t call it fluently. I get by.

Click here to learn about The Fuller Center’s Global Builders
program, including upcoming trips you can join!