When Christmas approached, it was time yet again for K’Hairi to climb upon Santa Claus’ lap and ask for the same thing as the year before. The 7-year-old did not ask for toys or video games. He did not even ask for the jolly old elf to end his struggles with sickle-cell anemia.

Instead, he asked for Santa to help his mother, U.S. Army veteran Carla Ross, have a nice house.

Well, he did ask for a couple of other things — a fan and a heater to fight the heat and cold that penetrate the old mill-era shack in which they currently live and where Carla pays about $350 a month in power bills. 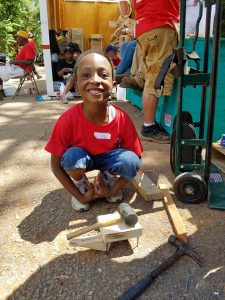 On Monday, June 12, K’Hairi’s wish began to take shape on Frank Hall Jr. Street in West Point, Georgia, as volunteers and community leaders worked under a blazing sun and smothering humidity to raise walls on the first day of a two-week blitz by the Chattahoochee Fuller Center Project.

Not only will they be able celebrate this Christmas in a new, safe, comfortable home, but K’Hairi also will be able to celebrate his eighth birthday there at the end of July. And for a family dealing with the constant struggle of trying to pay the bills while fighting a disease like sickle-cell, an affordable, energy-efficient home is a dream come true. In fact, it was a dream she had given up on before Chattahoochee Fuller Center Project Executive Director Kim Roberts convinced her that this opportunity was within her reach.

“Ms. Kim had to hunt me down because I was thinking that because I’ve got bad credit it’s going to be too hard to do this,” said Ross, who was active duty in the U.S. Army from 1994-98 before serving in the Army Reserve and being deployed to Uzbekistan after 9/11. “I thought there was no need in trying because I don’t like disappointment. She finally called and said, ‘I’m not taking “no” for an answer.

“It is a blessing,” she added. “I didn’t think it could ever happen for me, and I’d sorta given up trying because every time I took a step forward a storm would hit me and set me back a couple of steps. It’s a wonderful feeling that it’s really going to happen.”

It is the fifth year that the Chattahoochee Fuller Center Project has teamed up with Home Depot to help a veteran have a decent place to live, with Home Depot providing a $25,000 grant for the Ross build and Charter Bank contributing another $10,000. But the community support does not end there.

City officials — including Mayor Pro-Tem Steve Tramell and Fire Chief Milton Smith — were sweating it out Monday alongside other volunteers, including a team from New Birth Ministries, a yearlong addiction recovery program, and a crew from Perry’s Construction Company that included the boss, Michael Perry. The walls they are raising were provided by CrossRoads Missions and assembled by teams of students from Point University. Ten churches and businesses are providing meals for the workers, and the local Coca-Cola bottler is bringing water, sodas and ice. Meanwhile, a couple of Minnesotans — frequent Fuller Center volunteers Tim DuBois and Charlie Thell — are braving the Georgia heat to serve as house leaders for the build.

“It’s just been a whole flock of people from the community that have been involved,” Tramell said. “This is the group that will see the most dramatic change. This lets the community know that things are changing.”

“It was huge that the citizens wanted The Fuller Center to start back building in West Point again,” said Roberts, adding that a group of local citizens responded to an effort by Tramell to pool money to purchase the lot on which Ross’ home and another will sit. “It’s exciting to have the mayor support you and have the town support you.”

For Tramell, drawing The Fuller Center back into West Point just makes good sense for the city.

“We had a great need in this area of town to do some redevelopment, and this is a new start for Frank Hall Jr. Street,” he said while wiping sweat from his forehead. “This is going to be the kickoff for hopefully a lot more things to come to beautify this street and this whole area. It’s something that’s been a long time coming, and we really needed it. This is a great start. We’ll just keep going right down the street.”

‘I LOVE THIS WORK’

However, even if this build were happening in Lanett or nearby Valley, Alabama, Tramell probably would still be there working alongside volunteers. The build makes sense for revitalization in West Point, but his belief in the hand-up extended to families through this ministry is his main reason for serving on the build.

“K’Hairi is just as sweet as he can be, and Carla is just as deserving as she can be,” Tramell said. “It’s going to be a great thing to be able to get them out of the situation they are in and into something new and clean and safe and just wonderful.

“I love this work,” he added. “I wouldn’t miss it. I really enjoy being out here helping, and it’s a blessing to be able to help. One of these days, I’ll be too old to do this.”

Roberts gets emotional — not that that’s unusual for the woman who hears joyous shouts of “Ms. Kim! Ms. Kim!” from Fuller Center homeowner partners’ children almost every day — simply knowing that another family will have a decent place to live and that a little boy battling illness will have a healthy place to grow up.

“When you can take people out of those situations and put them into something that they can afford and is decent, you’ve changed their life,” Roberts said. “And K’Hairi is just precious. And he’s sick, but he doesn’t show it. He’s always got a smile on his face.”

That smile was even bigger than usual on Monday.

He’s already picked out where he wants to be,” said Ross, who noted that K’Hairi had been ill since Memorial Day weekend, improving enough only this past Saturday to be on the job site. “He said, ‘That’s my room!’ It feels wonderful. This is amazing with all of these people coming out to help. It’s just awesome!”