By Chris Johnson
Director of Communications, Fuller Center for Housing 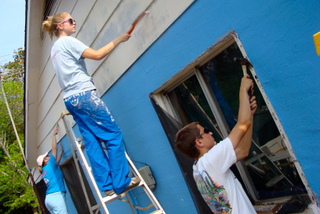 A group of 15 teenagers and a few adults from First United Methodist Church of Bossier City, La., are working this week to refurbish a pair of houses in the Koinonia community of Sumter County, Ga.

The group has been connected with The Fuller Center for Housing through its Northwest Louisiana covenant partner in Shreveport in previous projects but wanted to get an up-close look at the Americus-based housing ministry during this year’s summer mission.

“I think it’s good for them to see where it all started, see what’s going on and hopefully use it as a catalyst to become more involved where we’re at,” said Callie Dean, youth director at the church, whose youth group began its work Monday with a morning stop at The Fuller Center’s headquarters in Americus. 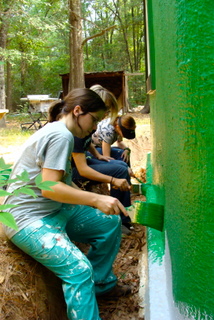 While half the group began their work scraping paint outside the home of Mamie Lee Bateman, the other half were busy painting and sawing away on the home of Nashua Chantal as the sounds of Katy Perry blared from a nearby radio.

“Volunteers are harder workers than paid people, usually,” said Dave Landis, a local contractor who was supervising work at the Bateman home. “The big thing is you have to slow them down tell them to think it through and be safe.”

“They’re all good kids,” said Arline High School Spanish teacher Katie Beville, whose job on the trip is to chaperone, though she quickly grabbed a paint scraper and joined the work on the Bateman home. She said she couldn’t sit still that long, and that the gnats wouldn’t let her anyway.

“I’ve worked on so many myself, it feels good to have them work on my mom’s house,” said Ted Bateman, a member of the maintenance team at Koinonia. “ 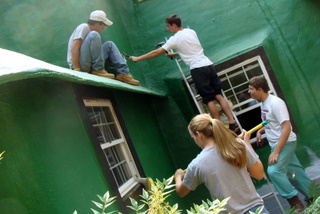 “Mission trip has always been something that I look forward to,” said youth group member Samantha Leland, who added that she was on her fourth mission trip. “You only gain what you give. I know if I was ever in a tight spot, I’d want people to help me.”

The group, which will return to Bossier City on Saturday, is being hosted by First United Methodist Church of Americus during its stay.

Have an urge to help a family in need? Click here to learn how you can pitch in just like the Bossier City students.