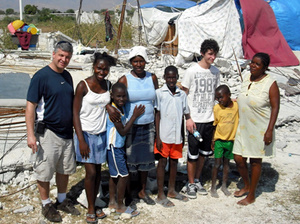 Fuller Center board member DJ Bakken just returned from spending a week in earthquake-devastated Haiti with a goal of making Fuller Center connections between local organizations that will not just rebuild homes, but empower communities to support themselves.

"That is my passion," he said. "To see these efforts get going."

For The Fuller Center, Bakken pointed out, building in Haiti is an opportunity to lay the groundwork for self-sustainability in a nation where 80 percent of residents live under the poverty line.

"I started interviewing some of the families that lost their homes," Bakken said. He met a woman living with her 14 family members, all sleeping under a big tree where they have a tarp set up.

And another man had a concrete home that began to crumble during the quake. Damaged shelter completely abandoned because of fear was something Bakken saw more than once.

"They’re scared to death of living in these houses because of the tremors that they’ve had," Bakken said. Home is no longer a safe haven.

Situations like these are opportunities for The Fuller Center to step in and partner with families to rebuild, Bakken said.

Bakken’s own disaster recovery nonprofit, Hope Filled Hands, works with a ministry called CityLights that will be heading to Bellanton, a suburb of Port-au-Prince in April to begin rebuilding a school there. 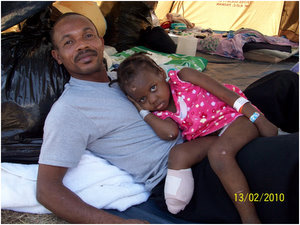 Their connections in that community will allow The Fuller Center to function better there and in Haiti as a whole. In Bakken’s work with multiple ministries and nonprofits, he helps bring the large picture together.

In his trip, Bakken was also able to confirm some locations that will be able to house volunteer building teams.

"If we can touch a couple lives to the point where they can be influencers in their community, that’s how we can change that community," Bakken said. The question we’re asking is, "How can we give a helping hand, so they can help themselves?"

Bakken wanted to remind people who want to help how much difference even a small gift can make. To put it in perspective, he said, the average Haitian lives on $2.00 per day.

"They may think that they can’t do a lot, but every dollar that they give will go towards a great cause," Bakken said.

Click this button to donate toward a Haiti home (estimated to cost $3,000):

Enlist the help of your friends to sponsor a home by creating a personal campaign page here.

Visit the Haiti page often to keep up-to-date with The Fuller Center’s progress there.