Nearly six years has passed since Peter Bay Le, a 75-year-old fisherman, lost his home on Foster Lane in Plaquemines Parish, La., to Hurricane Katrina – but he’s still living in a cramped, 300 square- foot trailer he purchased as a temporary shelter for $800. 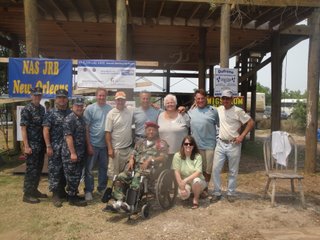 However, his situation is about to change for the better, thanks to recently formed partnerships among The Fuller Center Disaster ReBuilders, United Way, the U.S. Navy and the Committee for Plaquemines Recovery. Together, these groups will provide the funding and harness the hard work of volunteers to build Le a new home.

And because of that hard work, Le will be able to move into the 1,070 square-foot, two-bedroom project shortly.  A dedication ceremony, in which Le will be given the keys to his new home, is set to take place Friday.

Le, who served during the Vietnam War as an officer in the South Vietnam army, was no stranger to the type of hardship he endured after Hurricane Katrina. During the war, he was captured and imprisoned for 12 years at the infamous Hanoi Hilton, where his ankles were shackled with iron restraints each night and his days were spent in hard labor.

After his release from the prison camp he immigrated to the U.S., but has been unable to work outside of fishing due to disabilities – which were caused by the shackles – that make walking difficult for him.

Among the 300 volunteers working on Le’s home include 70 Navy and Marine Corps personnel from the Naval Air Station in Belle Chasse, all of whom want to show respect for their fellow serviceman and community member.

“It feels really good … to give back to your community, show the locals you care, you want to be good partners,” Capt. Tom Luscher of the U.S. Navy told WWL-TV.

Le’s plight highlights the ongoing struggle for 88 families in Plaquemines Parish who are still homeless or displaced after Hurricane Katrina, many of whom still live in temporary Federal Emergency Management Agency (FEMA) trailers.