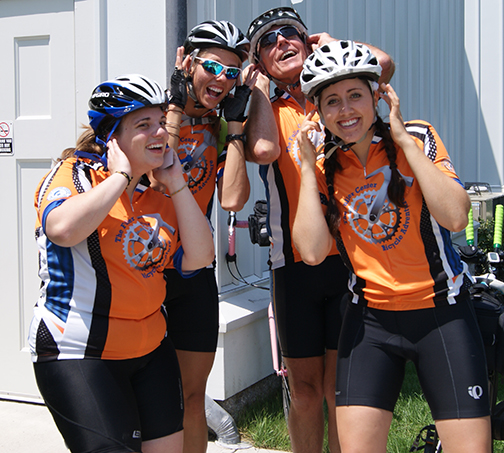 It’s day 5 of riding and I have to be honest I didn’t realize how emotional this ride would be for me. On May 29th (three days ago) Kelsey Merz celebrated her 23rd birthday. This day in particular struck home, since I am riding for a friend who passed on his birthday bike ride in October.

He was turning 23 and I deemed it unlucky to ride on your birthday, and especially 23rd birthday. Pulling through on that ride was rather hard and I didn’t feel right talking about it with my fellow riders. I felt selfish. After a long day and getting in the van at the final pit stop; I remember getting to the church, sitting on the stage in their auditorium, and crying to myself. My silly superstition had taken me over completely and I didn’t know what to do or who to talk to. I had put it out of my mind for long enough to make an appearance at the local homeless shelter where we were staying at (which had beds!) and didn’t really talk much until dinner that night.

At dinner, when dinner is provided, we give a presentation and introduce the riders. When it came to me to say who I am: Carmen Price. And why are you here: For a friend that passed who was extremely passionate about cycling. I realized I had more tears in my eyes than ever before. I was confronted by Tony Campbell later that night during pictures about my friend. He was asking me the hard questions and wanted to know what was going on in my peanut of a brain. I was so gracious that he was there for me because it’s exactly what I needed at exactly the right time.

Again later that night I had another great chat with age and wisdom on his side Tom Weber. I went up to him in need of a hug and once I was embraced I started to ball. He asked what was wrong and since I already felt comfortable enough to talk about it I told him about my feelings whilst on that ride during the day. He shared with me another hug and spoke encouraging words and helped me feel like a normal human.

Right as we had finished our conversation Kelsey Merz came up to us supremely excited about birthday cake, ice cream, and all the free birthday things she had wished to get on her day. The timing was perfect in my eyes. Still emotional I started to cry. She had no idea at the time what was going on and didn’t find out till late last night, but at that moment she took me in her arms and hugged me! It was such a hug that gave me feelings of hope for the next day to come and sadness for the loss of my friend who I will never hug in this life again.

Three days later and these feelings and that day are still affecting how I ride. Matt Wilson, my friend of 23 who passed from a heart attack while climbing one of the largest hills in Sonoma County, Calif., now rides with me every day. I have a picture of him in my Camel Bak water pack, and today I saw him (or at least his last name). As fitting as it would be the dang masochistic cyclist that he was, Matt enjoyed climbing. Just as I had crested this pretty steep hill (I’m unsure of the grade) I saw Wilson Park.

Just last night I wrote him on Facebook and told him where we were riding and asked him to join us. For me seeing that sign was telling me that he indeed was riding with me. I know that I will probably ride on my 23rd birthday and I will definitely be looking for Matt Wilson on my rides from this day on.