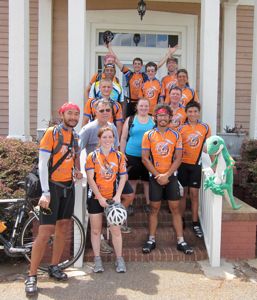 The Fuller Center Bike Adventure spent the weekend in Americus, where they traded their jerseys for work clothes Monday so they could hang gutters for local Fuller Center homeowners.

The cyclists–who are biking 2,500 miles in 50 days–arrived in Americus to a lively crowd of supporters at the Fuller Center office Saturday afternoon.

Fans and friends waited in the 96-degree Americus heat to applaud the team now 1,900 miles into their journey that began in Niagara Falls on June 20 and will end in New Orleans on Aug. 8. The trip was launched to raise awareness, to develop partnerships, and to raise $250,000 for The Fuller Center for Housing.

Bike Adventure leader Ryan Iafigliola led the cyclists, joined for the day by local riders, up the FCH driveway Saturday before they hopped off their bikes and were greeted with hugs and congratulations. 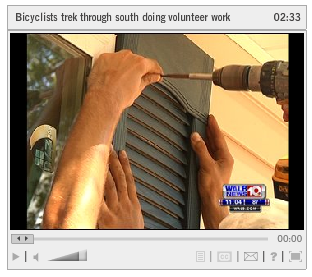 "It’s great to be home. It’s great to see so many friends," he said. The riders were invited Sunday to speak at six local churches. In the afternoon they toured Koinonia Farm and enjoyed dinner at the home of Linda Fuller, co-founder of the Fuller Center.

Monday the cyclists worked with the Americus-Sumter County Fuller Center alongside local volunteers to make progress on a new duplex under construction for homeowners Chuck Davis and Thaddeus Harris. In addition to hanging gutters, they hauled recycled concrete to build rock bed gardens that will be reachable for Harris and Davis who are in wheelchairs.

“The old foundation [from a house previously on the lot] was broken up so now we can recycle it and put it to use again. That’s kind of cool,” Ivan 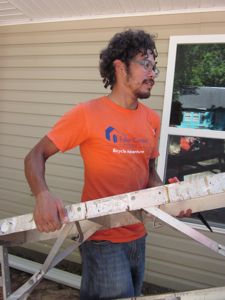 Cunningham, a cyclist from Lawrence, Kan., said. Cunningham is biking the entire journey from Niagara Falls to New Orleans.

He said he is enjoying his time “where it all started.”

“There’s been a good energy everywhere we stop,” he said, “But this is where the ripple started.”

Iafigliola said Americus is a highlight of the trip, now in its third year, because so many supporters join in the fun and because it is a place of history in the poverty housing movement.

“It used to be that Americus was the one place where we had lots of supporters. As the Bike Adventure keeps growing, we’ve had more and more places to stop with more and more people who show up to learn about The Fuller Center and to encourage us,” he said.

This week alone the team stopped every day in a city where there was Fuller Center work happening locally. 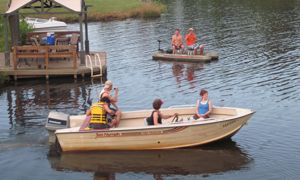 So far the team crossed nine states and stopped to build with Fuller Center covenant partners in four cities. Cyclists come and go throughout the ride, usually for a week or two at a time. Six new riders are joining for a day or more in Americus early Tuesday morning when the team heads to Pelham, Ga. There are only two weeks left before the finale of the Bike Adventure which takes place after a build day in New Orleans. And check out more details about the fantastic finale event featuring live music and local cuisine here.

To follow along with the Bike Trip as it happens with blogs, videos and photos or to donate to their hard work, visit www.fullercenter.org/bikeadventure.