Last leg of the journey

"To the coast!" Ryan Iafigliola shouted into the dark of the early morning on Aug. 15, the last day of the 2009 Fuller Center Bicycle Adventure. Iafigliola, Director of Special Programs at the Fuller Center, created and led the trip.

The cyclists surrounding him on their bikes responded, as was habit in their travels together, with: "Oyee!"

In addition to the 18 long-distance bikers, 14 of whom had come all the way from Benton Harbor, Mich. five weeks prior, over 30 other cyclists took part the last day for the ride to the coast of Florida—ending at Shell Point Beach.

One of those was Fuller Center President David Snell, fresh off the plane from a visit to the Congos (read more about that here). A few Fuller Center Tallahassee volunteers pulled out their bikes, as well as members of an area cycling club, the Capital City Cyclists. Some friends in Americus made the drive and joined in as well. And local Chairman of the County Commission, Bryan Desloge rode the entire 40 miles.

When they arrived at the beach they were greeted by friends and family, food and fellowship. But first, they ran hand in hand, fingers intertwined, into the ocean, then dipped their front bike tires into the water, symbolizing the completion of the 1,400-mile coast to coast journey.

After eating, a short ceremony was held where Iafigliola presented each cyclist with a small trophy and Snell presented Iafigliola with a plaque of recognition for his hard work.

The final ride was an easy one for those who’d been practicing for five weeks—only 40 miles. And the weather was cool and overcast, perfect for an August day in North Florida.

"It was really flat and short," Eric Schweinhart of Amelia, Ohio said. "It’s nice to think that a 40-mile ride is really short to me. I’d only gone on one 40-plus mile ride before the trip."

"It’s a little bit surreal. It hasn’t hit me yet,” said California-born Esther Chung when she exited the ocean. "We rode from Michigan to Florida!"

The trip meant a lot of different things to the people involved. First, there were the bikers.

"For me it was to have a summer that was just crazy but really useful and really purposeful at the same time. Over the course of the summer I definitely accomplished that," Melissa Merril, an engineering student at the University of Akron in Ohio, said.

"We’re absolutely thrilled to have hosted the adventure," he said. "They’re certainly a great witness to our faith. Really, think about what they’ve done: 1,400 miles and eight projects. It’s incredible. Absolutely incredible."

Also touched by the adventure were the homeowners, host churches, and anyone else they ran into or inspired along the way. And the funds they are still raising will help those in need of poverty housing in the future.

"The impact of what we’ve done we hope will be felt for many, many years to come," Iafigliola said.

The cyclists had one last task Sunday before heading their separate ways, and that was to visit six local churches and tell the congregations all about their adventures. After a final meal together, they hugged and said a few tearful goodbyes, already planning reunions.

Pledges are still coming in and it’s not too late if you’d like to support the riders.  All donated funds go toward a house building or repair project for a family in need. To donate to the bike adventure click here. (Fuller Center Bicycle Adventure is the last donation option.) Even $5, $10 or $30 will make a big difference. If you have already donated, thank you!!

Interested in taking part in next year’s Bicycle Adventure? Check the adventure’s Web site and Facebook for future news and updates. 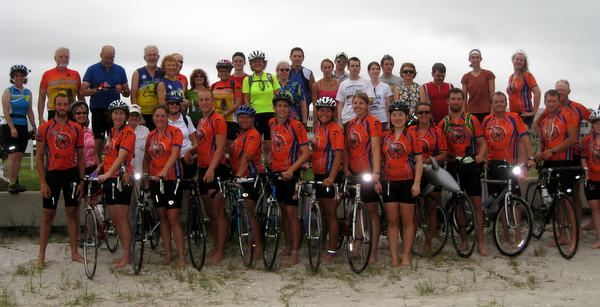