(Photo: Fuller Center of Greater New York City Executive Director Jim Killoran at the “Psalms 91 Distribution Center,” which he named this section of their ReUse Store in New Rochelle, N.Y.)

Most Fuller Center covenant partners — both international and in the United States — have seen their construction and repair work temporarily slowed by the coronavirus pandemic. The inability to assemble large teams of volunteers in a single location or to travel without major restrictions means business as usual simply is not yet possible, although signs of hope are on the horizon.

In the meantime, these groups are finding other ways to help their communities until they are able to swing hammers with full force again. For some, this means making new friends and establishing new partnerships in the nonprofit world, even stepping out of their comfort zones.

Fuller Center of Greater New York City Executive Director Jim Killoran, however, has an extensive history of community involvement that goes beyond the housing issue about which he cares so deeply. The covenant partner’s ReUse Store has long been partnering with local officials and like-minded charitable services in addition to its traditional purpose of raising money for construction efforts. Its large space in New Rochelle — New York’s first coronavirus “hot spot” — has been used for housing fairs, music events and church and corporate gatherings.

“It really serves a lot of purposes for the community, and we’re located in a dense main street with 20 apartment buildings of low-income families,” said Killoran, whose ReUse Store is now serving as a base for his staff and volunteers to distribute food, as well as more than 15,000 diapers and 1,400 masks. Soon, they hope to be delivering 200 cakes for Mothers’ Day. “We call it the Psalms 91 Distribution Center because we’re a faith-based ministry. But, yes, if you had told me that one day we’d be delivering diapers, I’d have said, ‘What the heck are you talking about?'” 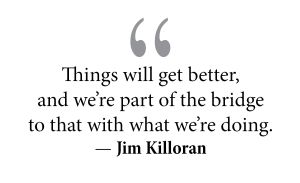 The faith component is as important to Killoran as the items they are distributing.

“We’re also kind of being a beacon of light because even churches can’t be open here,” Killoran said. “I know we’ve been a real resource, and people appreciate that. That’s what Millard was and what The Fuller Center is. For us to be there for the community and to be a beacon of hope is what Psalms 91 to me is about and what The Fuller Center is about. A home brings hope, and our volunteers bring hope — just like the hope that was brought to that community in Alabama after the tornado.

“Things will get better, and we’re part of the bridge to that with what we’re doing,” Killoran added, noting that his group is eager to hit the ground running once again with its primary mission of helping families have simple, decent places to live. “We hope it’s a time that people can think and pray about the important things. After a disaster, volunteerism usually spikes. We want to be building, but it’s actually a good time for us to plan so that we’re ready when we are able to build again.”

Meanwhile, down in Georgia

While New York has been America’s pandemic epicenter, the state of Georgia has been among the first to begin reopening — including such establishments as dine-in restaurants, salons, bowling alleys and movie theaters (all with extensive restrictions). But shelter-in-place orders remain in effect for many in the state, and it’s certainly not business as usual for affected families, still-shuttered businesses or nonprofits like The Fuller Center for Housing of Macon, Georgia.

Executive Director Lynda Brown of The Fuller Center of Macon also has a strong volunteer base, and she is sharing those valuable assets with other agencies in Macon — primarily Meals on Wheels.

“They have money and they have food, but getting the food to residents is proving to be difficult because both staff and volunteers are in short supply for them,” Brown said. “Those folks who had counted on seeing a friendly face on a daily basis are now only seeing somebody once every two weeks. So they set up a way for us to call and check on them and see if they’re OK and make sure they knew somebody cared.”

FCH Macon’s volunteers have another Meals on Wheels-related project, as well, in coordination with the United Way and other foundations.

A third way Meals on Wheels and The Fuller Center are now connected in Macon actually began from conversations the two nonprofits had before the pandemic. Officials at Meals on Wheels noticed that a lot of their shut-in clients were living in troublesome housing conditions, something The Fuller Center excels at remedying. While they cannot enter the homes now to make significant repairs, there are housing-related opportunities to help that are a little more in line with The Fuller Center’s focus.

“The homes are deteriorating around them because, clearly, if they can’t feed themselves, having the wherewithal to take care of their houses is not there,” Brown said. “So we’d already started partnering to clean sidewalks, cut grass, trim hedges and wash windows — outside kinds of chores for people.”

While The Fuller Center encourages its covenant partners to find like-minded partners, there is always a risk in normal times of straying from the primary mission of helping families have simple, decent places to live. However, Fuller Center for Housing President David Snell says these are hardly normal times.

“‘Mission creep’ is one of those things that strikes fear in the hearts of those of us dedicated to a single goal — in our case helping God’s people in need to have a decent place to live,” Snell said. “But these are extraordinary times, and many of our covenant partners are unable to do construction work. These are people with hearts of gold who want to be doing something to reach out, and a number of our partners are doing extraordinary things — admittedly outside of our core mission, but vital nonetheless. We applaud their good efforts and look forward to the day when we’re no longer creeping but marching boldly toward our goal of eliminating poverty housing.

“God bless all those who are acting with kindness, bravery and resourcefulness in these difficult times,” he added.