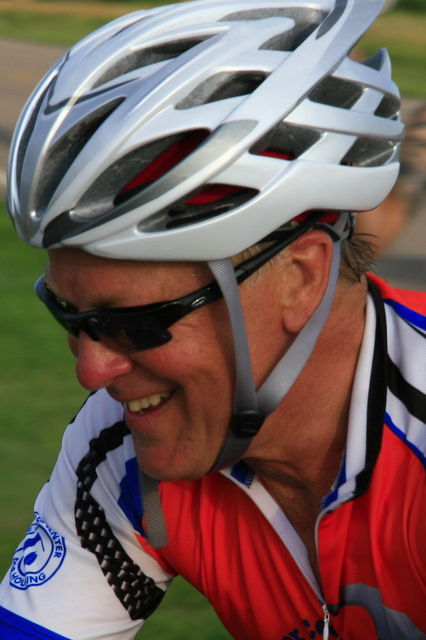 Wait!  What?  Why is my alarm going off at 3:45 a.m.?  Oh yeah, we are starting our ride at dawn in order to finish before the real heat of the day.  On Thursday, several riders had to be picked up by the van because of heat exhaustion.

Staying hydrated on hot days is critical.  Wind, hills and the heat radiating from the road all suck the liquid from your body at a rate that is surprising.  Once you experience thirst, you are already in the danger zone.

Our 6 a.m. start riding east into the sunrise on Highway 40 was great.  Imagine riding into the sunrise and coming upon a group of 26 bicyclists silhouetted by the sun, it was an impressive beginning to the day’s ride.  We were fortunate to have cloud cover for the first 20 miles of today’s ride.  That kept the temperature in a manageable range.

It was a quirky day of riding.  I began at the lead, stopped to take a few pictures of the sunrise and never saw the lead riders again.  We crossed the Kansas border with Colorado in the second leg of today’s ride.  Another rider had a flat.  The four riders following all stopped to help (watch) him change his tube and resume riding.  Our next rest stop was at the Fort Wallace Museum – featuring a sculpture of a buffalo made from barbed wire.  The museum had many Indian and early settler artifacts.  It would have been enjoyable to learn more of the history, but clear skies and warm sun pushed us on.

The third leg of the ride featured many rolling hills.   In my imagination I could picture buffalo roaming and grazing the hills.  I told my companions that the buffalo were coming over the hill, but no one pedaled any faster!

When we left the last rest stop the temperature had climbed to 98 and I didn’t think two bottles of water would be enough for 22 miles.  We rode and looked for a small town or grocery store on the Highway.  What we found was the “Mexican Café.”  When we walked inside I thought to myself: “We will never get ice water in this place.”  A whirling ceiling fan barely managed to move the air as everyone stared at the apparition of bicyclists walking into a local hangout.

One patron asked where we were biking and we launched into our pitch for the Fuller Center for Housing.  We told everyone that we were biking to Oakley and a couple reported that they had just driven from Oakley to have lunch at the Mexican Café, Ranchito or Dell’s Place.  Dell was an octogenarian who was open for business on Wednesday, Thursday and Friday.  Everyone said we should have some of Dell’s famous green salsa because it would make us ride faster.  The daughter of the couple said her sons told her not to return to Kansas City unless she had two containers of the green salsa.

Dell was feverishly heating tortillas on the griddle while Frank, the server who we think was deaf, kept bringing plates to the tables.  Tacos, enchiladas, burritos and sopadapilla were featured on the menu tacked to the wall above the stove.  The food smelled good and was really tempting, but the thought of riding in the heat with a full stomach of Mexican food was enough to assuage our hunger for a few more miles.  Finally, the customers helped us fill our water bottles and we began to leave.  When I tried to open the door, I discovered that there was no door knob, only sticky electrician’s tape to pull the door open. Although the building was almost falling down, Dell has been doing a steady business for over 45 years.

Replenished with water, we rode at a steady 18 miles an hour into Oakley, KS just as the temperature reached 102.