I was in this week, the home of The Fuller Center for Housing’s first domestic project.  We started building in the Allendale neighborhood shortly after Hurricane Katrina devastated the .  I remember my first visit there in the fall of 2005.  It was a neighborhood in distress, ravaged by poverty and crime.  There were a few families left, but most had fled as drug dealers and wickedness fought for turf.

Today the derelict shotgun houses are gone, replaced by tidy bungalows.  Flower beds flourish where weeds once ruled, and children are heard playing in the park.

In five short years the has built 42 new houses and rehabilitated another 43.  The Shreveport Police Department reports a 73% reduction in major crime in Allendale since our work began there.  73%!  Allendale is more than a success story—it’s a miracle.

But like all good miracles this didn’t happen by chance.  The restored Allendale is the result of the efforts of two organizations with complementary missions—The Fuller Center for Housing and Community Renewal International.  The knows how to get houses built.  Community Renewal knows how to get communities restored so that the families who move into those new  houses have the tools they need to succeed. 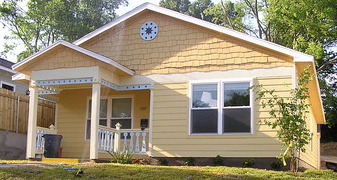 It was at the invitation of Community Renewal’s founder and my good friend Mack McCarter that The Fuller Center  first went to .  Thousands of families had fled
south after Katrina, and became a major evacuee center.  Community Renewal already had a presence in Allendale, so that’s where we started to work, Building on Higher Ground with families who wanted to reclaim their lives in a safer place.  At the time Millard Fuller said, “We’ve built houses in more than 100 countries for more than one million people and I’ve never seen a more exciting opportunity than what I see here in .  We have a chance to bring out of utter destruction something beautiful for God.”

Another of Millard’s dreams has come true.  A broken community has been restored, despair has turned into hope, and a few more children have the opportunity of growing up in a place that is safe, clean and dignified.  There is no greater example of the power of this ministry and the strength that comes from healthy partnerships.

YOU CAN HELP:
Volunteers are needed in Shreveport to help launch the building of "House #43" on Saturday March 26, 2011.   Learn more about the build and The Fuller Center’s work in Shreveport.