I’m on the road again, this time back to Congo with a United Church of Christ Global Builders team.  The UCC 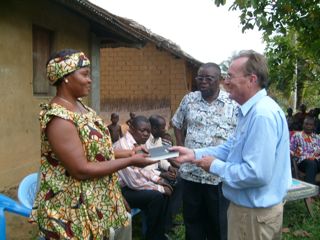 collaborates with the Disciples of Christ in it mission work, and it was the Disciples that sent Millard and Linda to Zaire almost 40 years ago.  So this is a trip of historical import, a return to the place where Millard’s house building vision turned from a notion into reality.

We’ll spend a little time in Mbandaka on our way from Kinshasa to Bolomba.  It was in Mbandaka that the first partnership houses were built overseas.  The story of this effort is told in Millard’s first book, Bokotola, and a great tale it is.  Our friend Don Mosley, who is working so hard on our North Korean initiative, did the survey work for that first community.  This is a place rich in history.

The first houses were built on a parcel of vacant land in the heart of the city, a place called Bokotola.  The area was barren because it marked the separation between where the white settlers and the black Congolese lived.  On July 4, 1976, the day America was celebrating its bicentennial, the housing project was dedicated.  162 houses had been completed—and the waiting list had grown to over 5,000.  At the dedication service Pastor Boyaka Inkomo, regional bishop of the Disciples, spoke.  In his concluding remarks he said “We now propose to the authorities of the Sub-Region to change the name of Bokotola, which signifies “the person who does not like others,” to Losanganya, which means ‘reconciler, reunifier, everyone together”.

Now, some 35 years later, The Fuller Center for Housing is building again in Zaire, now called the Democratic Republic of Congo, in the village of Bolomba.  Bolomba is in the deep jungle, some five hours by boat from Mbandaka.  It is a place from the past, with no electricity, no television, no cell phones.  It was also the site of one of the last battles in the 2001 civil war so, like so much of Congo, it is a place in need of reconciliation.  It is a place of great poverty, but the people there, like people all over the world, seek a better life for their children.  They laugh and love and share of what little they have with those who have less.

We’re off on a great adventure.  We’ll report in through the week as we’re able.

Read more about the adventure to the Congo here