I had the great privilege this last weekend of being part of a very special house dedication. 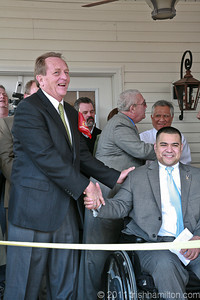 The for Housing of Northern Virginia has been working on an addition to the Himan’s house that will allow their son and brother Josh to come home.  Josh was severely injured when his Humvee hit a roadside bomb in and has been living at Walter Reed for the past eighteen months.

The dedication was a huge event.  Hundreds lined the streets in to welcome Josh home.  Police motorcycles led the motorcade and General Joseph Dunford, Assistant Commandant of the Marine Corps, greeted Josh as he arrived.  The Marine Corps band played, government officials spoke, and the community celebrated.  It was a grand event.

There was so much about this weekend that speaks of the essence of our work.  The builds and renovates houses with families in need, families who don’t have access to the resources to do it themselves.  But the corollary benefits make this more than a simple building effort.  By the work that we do The Fuller Center brings people together, and that was part of what we celebrated in on Saturday.


Tens of thousands of dollars were given to this project, in cash, materials and time.  Hundreds of volunteers got involved—people of all faiths, races and social backgrounds.  In honorable Marine fashion the Corps took good care of one of their own, but beyond that the community came together to honor this young man for the sacrifice he made.

The most touching moment of the day came at the end of Josh Himan’s comments.  Here was a young man whose life was forever changed in an instant.  He spoke from the wheelchair that will now be a fixture of his life because he went to war and sacrificed so much for us all.  After expressing his deep gratitude for all that had been done Josh said, “I hope that someday I too can give something back.”

It is a great blessing to be involved in a ministry that does such noble work.  This is truly righteousness in action, and the many miracles that attend our work tell us that the good Lord smiles on it.  Everyone involved in the dedication event, and the hard work that led up to it, went to bed Saturday knowing that by their efforts a deserving vet was brought home, a family was reunited, a community was galvanized, and the world was made a better place.

Click here to watch videos, read articles and view photos of the dedication.