After 79 miles of biking on Monday through a few showers and across the Pennsylvania-Ohio border, we settled into Escape House, a retreat center located on the grounds of The Church in Aurora, Ohio. After an early dinner, a number of us watched the US pull out a great win over Ghana in our opening World Cup match. We tucked our bikes away in the basement and bid them farewell for a day off the saddles, trading them in for hammers and paint brushes. 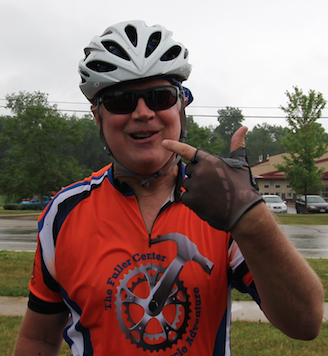 Work day, surprisingly enough, often means that we get to sleep in a little later since we don’t have to pack up and move on down the road. Most slept til 6.30 or 7.00 for an 8:00 am breakfast. that was prepared for us by volunteers at The Church. Walter Chapman, the head of the Fuller Center’s local partner Neighbor to Neighbor, explained the day’s work plan over breakfast and introduced us to a dozen local volunteers who would serve as crew leaders for the day. Walter mentioned that this was the first time that Neighbor to Neighbor had organized a large group of volunteers on multiple work sites and we would need to be patient with them. We saw no indication of their lack of experience and this was one of the best organized volunteer work days that I have ever experienced. We divided into 6 teams based on construction experience and the skills needed for various sites, and then met our local team leaders and headed out to nearby Chagrin Falls Park to work with 6 different families.

The goal of the day was to complete a number of projects at each site including painting, installing a water heater, pressure washing exteriors, new kitchen and bathroom plumbing installation and cleaning out a basement that needed a lot of attention. My crew had two main assignments – repair roof leaks around the skylights and various roof vents and repair a back porch and deck that were pulling away from the house and leaning severely to one side. We arrived at our worksite and met Ruth, who welcomed us into her home and introduced us to her delightful granddaughter Kendra, who proceed to entertain us for the rest of the day. Dani and I hit the roof with 3 gallons of tar and brush in hand, along with a desire to conquer any fear of heights that we might have. Meanwhile, crewleader Jerry and local volunteers Bill and Stu teamed up with rider Dan to work on the deck. They dug a hole halfway to China attempting to repair the footer under the deck, and ultimately solved the deck problem with multiple bags of concrete, two dozen lag bolts and a lot of elbow grease.

For most of the afternoon, we alternated entertaining and being entertained by 4 year old Kendra, and as we took turn spinning her around in circles and playing games with her. Even though we were at her house to repair it and move on, possibly the most important time on that site was the time we spent with her. In a few short hours, she befriended and charmed everyone. I sure hope that we stopped the roof leaks and that Ruth and Kendra now have a much safer porch. But what I will always remember about our work day in Chagrin Falls Park is the constant giggling that I heard while Kendra wrestled in the grass with Dani and Dan. The hard work is important, the repairs are needed but the relationships are certainly the most important thing that we build as Fuller Center volunteers.