Auburn Magazine, the official magazine of the Auburn Alumni Association, is being recognized in July by two awards from the Council for Advancement and Support of Education (CASE). The magazine received national honors in their district for the categories of Best Articles of the Year and Periodical Staff Writing for External Audiences. 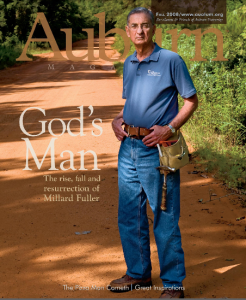 The Best Article of the Year winner was an article from the Fall 2008 issue of Auburn Magazine titled “God’s Man: The Rise, Fall and Resurrection of Millard Fuller,” written by Associate Editor Suzanne Johnson. The article chronicles the life and career of 1957 Auburn graduate Millard Fuller who was one of the founders of Habitat for Humanity.

“I was thrilled for Suzanne and the magazine as a whole,” said Betsy Robertson, editor of the magazine. “(Fuller) had created something out of nothing with Habitat for Humanity. The story had drama with his conflict with the board among other things. The magazine exposes all that drama and it really resonates with a lot of people.”

Now, two issues later, the story is still resonating with readers. Auburn Magazine sends out a survey to about 5,000 subscribers after each issue, asking them what they liked or disliked about the magazine. “We have them rank our stories,” said Johnson. “The Fuller piece is sill coming out on top.”

The awards are an exciting achievement for the Auburn Magazine staff because this is the first year the magazine has won a national award from CASE. The magazine typically wins one or two regional awards per year, but on the national level they compete against almost every university in the country, including the Ivy Leagues and many privately-funded schools.

“We realize that every university puts out a magazine,” said Johnson. “The way to differentiate ourselves is to realize that we’re competing against Time, Newsweek, and whatever else people receive in their mailboxes on the same day.”

“We try to improve on something every day,” said Shannon Bryant-Hankes, the communication and marketing specialist and chief designer.

To continue improving their finished product, the staff put Auburn Magazine through a major redesign last year. “The magazine now has a sense of continuity that we haven’t had in the past,” said Bryant-Hankes.

For the past 15 years the dues-paying members of the Auburn Alumni Association have been receiving Auburn Magazine. “It is many of the alumni’s favorite benefit of being involved,” said Robertson. “They love to read about other alumni and their successes and triumph over tragedy. They also have a hunger to hear about what students do here each day.”

“I would hope that the alumni would see our awards as their awards as well,” said Bryant-Hankes.

Though the magazine’s staff is relatively small – only two editors, an art director, designer, and various other student-held positions – the magazine continues to successfully compete against the other magazines in the SEC. “We beat most of the SEC, but we don’t want to restrict ourselves to that,” said Robertson. “We want to be the best in the country. This is like our football team. We want to win!”

Auburn Magazine is published quarterly, in August, November, February, and May. The Auburn Alumni Association that it serves has a blog, facebook page, a Wikipedia entry and a Twitter profile.