In short, it’s a city barely brushed by Superstorm Sandy and back to business as usual.

Until you look deeper. Then you see waterlogged homes, destroyed drywall and insulation, mold taking hold in homes, weary residents and lives turned upside down. That’s what Merle and Neil Brown, leaders of The Fuller Center for Housing in the New Jersey Pines wanted Lyman-Barner to see. Of course, things like mold and residents shivering without heat are not a big selling point for a city whose economy relies on tourism. 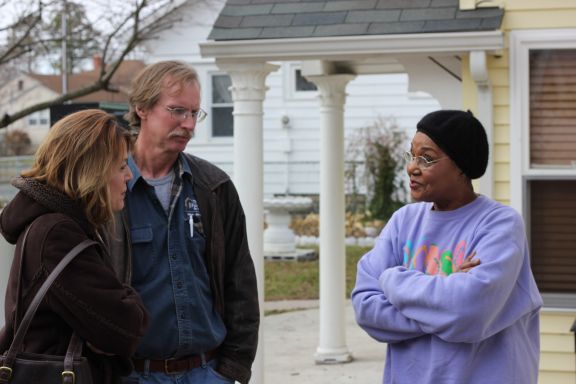 “The casinos are back in operation, and this is very important for the city’s economy,” Lyman-Barner. “So the city itself is putting up candy canes and publicly pretending there’s nothing wrong. But the reality is very different for families in need. What concerns those of us involved in helping people affected by the storm is that they’ll be forgotten if there isn’t somebody there because the groups will go elsewhere and forget about Atlantic City. So I think we’re in the right spot in terms of an underserved area with a big need.

“In terms of a big, superstorm recovery effort, Atlantic City is quickly becoming forgotten in the mix. But I saw the people suffering. A lot of the house damage you couldn’t see from the outside because the storm water came in and receded. I saw the least number blue tarps I’ve ever seen in a disaster zone. It’s a hidden disaster in a sense.”

New Jersey Pines is about 50 miles from Atlantic City, but the covenant partner already is at work in the resort town, helping to make sure that residents who may feel overlooked are not forgotten. Lyman-Barner said that their working in partnership with agencies such as HopeForce and support from such groups as the North American Retail Hardware Association has helped New Jersey Pines get up and running.

“The NRHA sent out more than 1,500 emails to their suppliers, manufacturers, wholesalers and independent store owners,” Lyman-Barner said. “We’ve already gotten some donations, and it’s going well. We still have a need for drywall and insulation.”

It did not take long during the damage assessment process for Neil and Merle Brown to find a project that needed addressing immediately. The first Fuller Center rebuilding job in Atlantic City is for a couple of elderly residents, Tom and Elisabeth.

At 86, Tom suffers from dementia and, after having a terrible experience evacuating before a brush from Hurricane Irene last year, refused to evacuate as Sandy beared down on the Jersey shore. At the storm’s peak, seawater lapped at his bed, in which he continued to sleep in wet sheets. By the time Elisabeth could finally fight through police blockades to get back to her home, Tom had not eaten or taken his critical heart medication for two days.

Now, New Jersey Pines is partnering with Elisabeth to help her prevent mold from setting in and to rebuild. And, this week, Bart Tucker of The Fuller Center’s Disaster ReBuilders will be in Atlantic City consulting with the Browns, who had no idea when they became a covenant partner a couple years ago that it would entail the urgency they are now seeing in Atlantic City.

“It’s an overwhelming thing, but there’s an energy that comes with a crisis like this,” Lyman-Barner said. “They’re in good spirits and thinking about organizing and relationships in ways they might not have if it weren’t for the disaster. But they’re certainly being stretched from their home area in Tabernacle 50 miles away.”

One thing it means for New Jersey Pines is a likely change of focus for the 2013 Millard Fuller Legacy Build, which they were selected to host and intended to be part of a 100-house renovation effort in the Pemberton community. While they remain committed to helping that project involving other groups, the Legacy Build may shift to the east. Also, having been scheduled for July 29-Aug. 2, it likely will happen a little earlier next year.

“We’re rethinking everything,” Lyman-Barner said. “We are seeing that there’s a more urgent priority than what we had planned. And there’s an opportunity and interest in wanting to respond to the storm. New Jersey Pines is committed to Pemberton project, but in addition to the long-term work in Pemberton, they’re going to do this quick, concentrated work in Atlantic City. It’s good, solid work that we know how to do. The earlier we do it, the better for the families, but it takes a while to organize for 200 volunteers.”

Click here to donate to The Fuller Center’s recovery efforts.