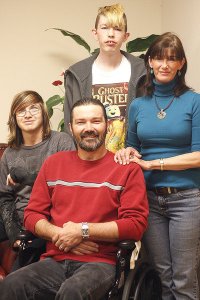 Started by Habitat for Humanity founder Millard Fuller and his wife and co-founder Linda in 2005, The Fuller Center for Housing is a program dedicated to the construction and renovation of homes for families in need. Mark Galey helped begin a Fuller Center covenant partner in Atlanta in September 2007 and now serves as president.

After a chance meeting of Galey and Shane Persaud, founder of Building Design Partnership, LLC in Henry County, Project McDonough was hatched.

“Last March I got a call from Mark Galey, who also happens to live here in McDonough, and he invited me to become part of a project he was planning here,” he said.

Persaud’s business is an architect design firm and he had been searching for a way to give back to his community.

“I thought it would be just volunteering for a couple of hours on a Saturday just to do my part, but it became more of a leadership role because I fell into it with Mark,” said Persaud. “Together we worked on coordinating and inviting volunteers and meeting with churches, doing cost estimates and it ended up being the two of us spearheading the thing.”

Since its inception, Persaud said they have done 17 projects in the McDonough and Henry County area, which is the focus of the project. Many of them involved work ranging from roof replacements, repainted exteriors and some major renovations.  Continue reading >>

Learn more about or get involved in the work of The Fuller Center of Greater Atlanta here.