About this time last year, The Fuller Center for Housing’s building partner on the ground in El Salvador — People Helping People (Gente Ayudando Gente) — was just beginning to get to know the families of Nuevo Cuscatlán who were living in pitiful shacks resting precariously on muddy hillside.

They were being selected to partner with The Fuller Center on an ambitious project to build 90 new homes, relocating the entire rural slum to a community of decent homes with running water and electricity.

Last week, Fuller Center President David Snell paid a visit to the community with a group organized by U.S. leaders of People Helping People, including Jeff Cardwell, the group’s founder and a Fuller Center for Housing board member.

“It’s an amazing project,” Snell said upon his return, confirming what he had seen in photos and videos from the site throughout this year. “We have 77 houses all but done, just a handful left to be finished up. And we’ve started the last 13, so we’re sneaking up on that big number. The 77 will most certainly be done for those families to celebrate Christmas in their new homes.

“The families are ecstatic,” Snell added. “And these aren’t big homes. They are modest, but they are such an improvement. It’s a profound life change for these families.”

The Nuevo Cuscatlán community was made possible by having effective leadership on the ground with Gente Ayudando Gente led by Lisselot Francheschi; a funding partnership with New Story Charity; additional funding by Fuller Center donors; and the support of Fuller Center volunteers through the Global Builders program. 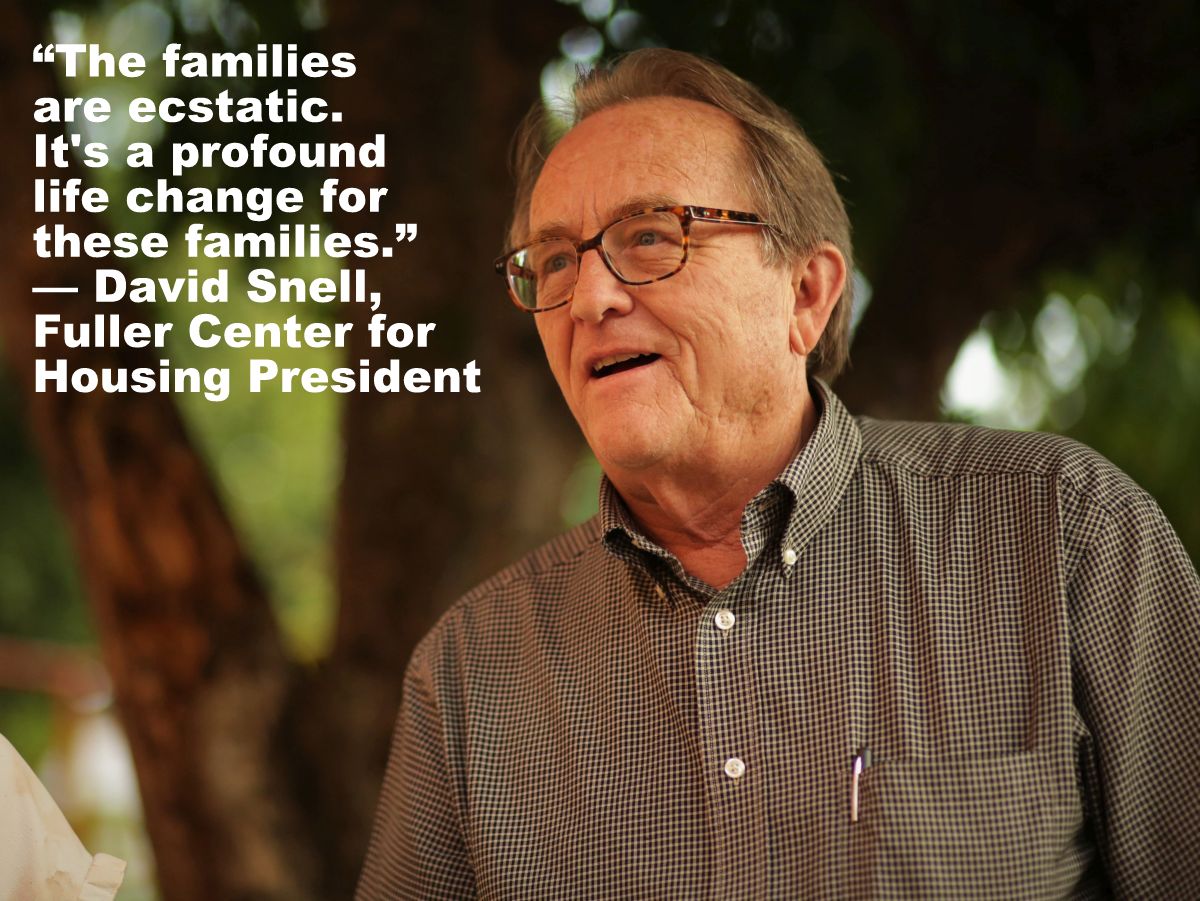 Snell said that one of the most memorable encounters he had in Nuevo Cuscatlán was with a blind woman and her two sons.

“The oldest had been taken by the state because her house was so bad,” he said. “They’ve been reunited now. The family is back together and living in their home.”

He also met residents who had considered leaving their home country for the United States before The Fuller Center helped them have simple, decent places to live.

“They’re not going to want to leave this community,” he said. “I got to visit with a couple of those folks. They were desperate. Their housing conditions were driving their lives.”

Bolstered by the success of the Nuevo Cuscatlán project, The Fuller Center is partnering once again with New Story Charity, Better Homes & Gardens Real Estate and Gente Ayudando Gente on a similar effort — an 80-home project in Ahuachapán, El Salvador. President Snell and the People Helping People group also paid a visit to the Ahuachapán site and met the partner families there.

“Ahuachapán is up in coffee country, up in the hills,” Snell said. “The land is there and it’s a great plot, a level plot. The families are quite poor, actually more destitute than the families of Nuevo Cuscatlán. And they’re large, extended families, so we’re going to build a little larger house there. That project will start before the end of the year, and the families have already been selected.”

The total cost of building each home in Ahuachapán is the same as Nuevo Cuscatlán — about $7,000. New Story Charity will provide about $6,000 per home, leaving The Fuller Center to cover the remaining $1,000 per house for infrastructure and other related costs. With the $6,000 per house coming from New Story, that means Fuller Center supporters can make a home possible for just $1,000.

Donations also are recycled as homeowners repay the costs of building into a Fund for Humanity on terms they can afford and with no interest charged or profit made to help others in their community get the same helping hand.

Photo gallery from the trip to El Salvador:

A brief video glance at The Fuller Center’s international work in 2016, a record year: