His Holiness Karekin II, head of the Holy Armenian Apostolic Church, has long worked to help Armenians recover from the devastating earthquake of 1988 and decades of Soviet rule. He has helped promote the building of churches, schools, and houses — the latter boosted by a firm partnership with The Fuller Center for Housing-Armenia.

In 2006, he announced the “Building on Faith” work project grant, initially aimed to assist 37 families, symbolizing the 36 Dioceses of the Armenian Apostolic Church together with the Mother See of Holy Etchmiadzin, established in 301 A.D. and led by His Holiness Karekin II. In 2007, the project was expaned to help 37 more families, and in 2009 a new agreement was signed to assist another 34 families. 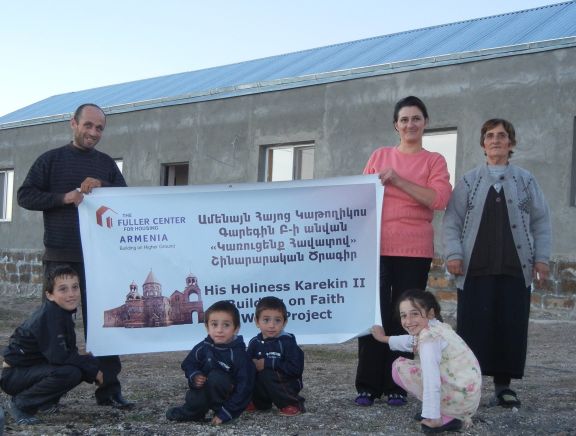 This month, the Harutyunyan family of Tigran and Salvi and their four children became the 108th and final family to benefit from the six-year collaboration. Their home in the village of Irind in the Aragatsotn region was partially sponsored by financial services corporation KPMG Armenia, a frequent supporter of The Fuller Center’s work.

The local municipality had given the family a partially built structure that had been originally intended to become a boiler house. But even with the gift, the family was unable to continue construction because of their meager farm income and the high cost of obtaining a bank loan. But, today, the Harutyunyans are the proud owners of a beautiful, safe home in which they can raise their four children.

“This is the happiest day in my life, in the life of my family,” Tigran Harutyunyan said. “We are so grateful to The Fuller Center for Housing-Armenia, to the people who came and build together with us. Let this happiness find others, too.”

Of course, the Building on Faith project is just one element of The Fuller Center for Housing-Armenia’s work. Since becoming a Fuller Center covenant partner in 2008 after departing Habitat for Humanity, FCH-Armenia has completed more than 200 homes with the capacity to do many more, according to FCH-Armenia Resource Development Manager Gohar Palyan, who has seen Armenia become one of the most popular destinations for Fuller Center Global Builders teams.

“We have the capacity to build more than a hundred houses per year,” she said. “We can do more — with the help of funds, donors and volunteers, both local and international.”