A Global Builders team that built with The Fuller Center in Armenia Oct. 4-18, 2009 (led by Cynthia Erickson) kept a journal passing it to a new trip member each day. Read a few days below to get a taste of a GB Trip to Armenia… (Want to know more? Read the entire journal here.) 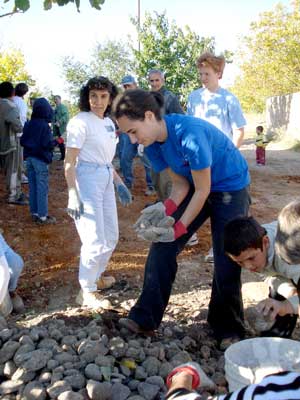 We stopped by a new supermarket to change dollars into dram, and then walked through Republic Square to the Marco Polo for lunch.

Republic Square is being prepared for Yerevan’s 2,791st birthday with a large concert and performance on Oct. 10. The city itself looks vibrant and well kept, and a few high rises are under construction.

By 2 p.m. we were ready to head up to Vanadzor. Melik did an excellent job of driving us in the new FCH Armenia 25-passenger van. We made a quick stop at the Armenian alphabet place for photos, and stopped again to buy apples and grapes alongside the road. Melik drove us upward through fields of newly harvested hay and apple orchards. We photographed farmers digging potatoes, picking cabbage, and tending to sheep and cows.

After an hour’s rest we headed off to dinner at a new restaurant built in the shape of the ark. Tatevik gave us an introductory orientation, T-shirts, and a manual full of the photos and stories of the families in the program this year. Jivan made a number of welcoming toasts, and we enjoyed a wonderful meal together.

Tomorrow we’ll begin work at our first house, at Lazarian World Homes. Jivan promises to have us spackling like pros in no time.

Today was our first work day. Had breakfast at the hotel and got on the van that drove us to the work site. We were greeted by Jivan, the building supervisor of the project. He gave us a tour and brought us to the Community Center that was under construction. After a briefing we began to work, taping and spackling the walls and ceiling. We were joined by two new future residents – Laura Balayan and Marine Sarakhanyan.

We stopped for lunch and were served salads and delicious dolma made by Tatevik’s mother. We then visited three families that moved into their homes, which we worked on last year. It was great to see the joy in their faces (what a change from last year when we visited them in their domiks.) At the end of the work day we cleaned our tools and put them away. 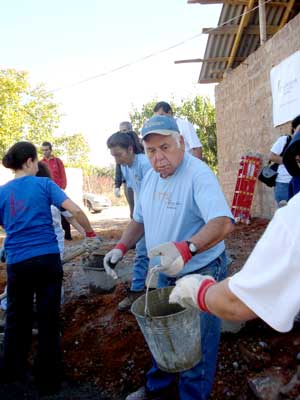 Around 8 a.m. this morning Charlie let me know that I’d better get up to prepare for the day before breakfast. After I had, I came downstairs to a breakfast of eggs, bread, butter, cheese, sour cream, marmalade, tea and individually wrapped hot dogs Next we grabbed our stuff and headed out to the van.

Our first task today was to fill in with dirt an area that will be beneath the stage in a large room of the community center. We did this via a bucket brigade carrying dirt from outside a window near the ‘stage’. We hadn’t quite finished by lunchtime. At lunch, we were offered: green beans with eggs, red peppers, tomatoes and cucumbers; something based on cauliflower; breads; cheese; and drinks. Toward the end of lunch, in walked three men including Hratch of ARDA, who unexpectedly started speaking to us in English! He thanked us for coming and he mentioned some of ARDA’s other projects and the difficulties facing the project we’re working on – the city is late in covering its part of the project.

Dinner was at Café’ Izagri, where Cynthia and Charlie saw a familiar face – Maryam. They had seen her last year at a different restaurant. Interesting foods there (Izagri) included buffalo yogurt, ‘grilled’ bread with cheese (khatchaboorie), and tea that came in fancy containers. We finished off our day together with a dance rehearsal in which Tatevik’s children were involved. They performed a few dances for us, then invited us to participate in the final one.

Today was definitely full of surprises. Seeing the blue sky after several days of it being overcast. Learning that there was a lot more scraping and spackling to do.

But the one that moved me the most was when one of the members of a family in the development offered us some rose hip drink. We were admiring the rose hips when she offered for us to try some of the drink. When we finished the first glass, she quickly poured a second. This woman has very little to give, yet here she is insisting that we have a second glass of rose hip drink. She probably would have given us the last drop if we had asked. The lady, Anahit, was a great grandmother. She had picked these rose hips in the forest. Not an easy task in itself – picking the rose hips. Probably even more difficult with age. Yet she would have given us everything. These are the little random acts of kindness that make the day worthwhile. 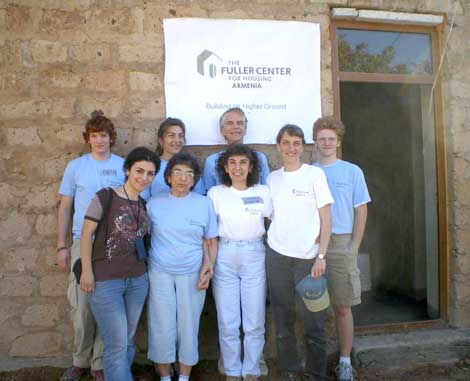 Homeowners Svetlana and Hasmik joined us today. It is really great to have some of the homeowners working with us. We get to know them a bit and it’s nice to build a small relationship with them – much better than just seeing them in their depressing domiks.

Our work day started with a bucket line (YAY! Our specialty!) that transported concrete from outside the building to the stage. We finished that before lunch, all the while visiting with the new acquaintances in our midst. I hope Hasmik and Svetlana didn’t feel neglected!

Lunch was served in the same little unfinished house where we’ve eaten every day. It’s so bright and cheery. Our fare today included cucumbers and tomatoes, shredded cabbage salad, cooked beet stalks, and a delicious, well-liked pilaf that included chicken and shredded carrots.

Our evening wound down. We returned to the hotel to sleep or read. Some checked in at the Internet cafes.

Fenya asked a rather thought provoking question this evening. First she asked if we liked Armenia. Then she asked why didn’t we move to Armenia. It’s one of those questions that makes one stop and think. The day ended as it had begun – with a very light rain.

The build trip was made up of three generations of Erickson’s family–a story covered here by The Armenian Reporter.

Follow the rest of the week’s journal entries here!

Or, sign up for a Global Builders trip to Armenia right now.