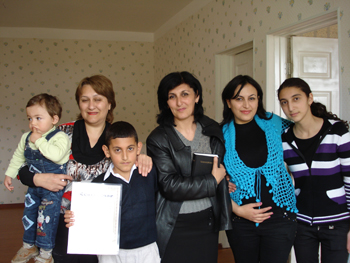 The Vardanyan family in Armenia lived in a metal shipping container (called domiks) since 1988 when an earthquake destroyed homes and temporary shelter provided by the government turned into permanent housing.

"Almost all people living in metal containers have the same story," Tatevik Ayvazyan, of Fuller Center Armenia, said. The earthquake killed some 27,000 people.

"Many children grew up in the temporary shelters and now their children are growing up in the same conditions," Ayvazyan said.

The Vardanyan’s, Marine and Artush, who have two teenaged daughters and a 10-year-old son, have been living in a metal container district in Vanadzor City.

Artush was living at the domik when he married Marine in 1990. Artush’s parents lost their apartment during the earthquake in 1988. They were waiting for government aid. Finally, they got it in 1995 in Taron district. But, Artush’s father soon found out he had cancer. The medical service was very expensive, especially for a low-income family.

They began to borrow money from the friends and relatives. When Artush’s father passed away in 2000, Artush’s mother decided to sell the house to pay for funeral expenses and repay the debts they owed.

In 2005 this family had a chance to purchase a home through the Fuller Center of Armenia. But Artush didn’t have a job at the time and Marine decided it wouldn’t be a responsible choice. They applied again when he secured a job and she felt confident that they would be able to afford the interest-free mortgage.

"This is now the only opportunity for the family to get a safe house and live in peace," Ayvazyan said.

The Vardanyan family’s Fuller Center home was blessed this summer.

"Now the family has a nice house," Ayvazyan said.

Their home came as part of the Fuller Center for Housing Armenia’s fruitful partnership with the Armenian Relief and Development Association (ARDA) and the Vanadzor Municipality. As a result of these relationships, already 16 families moved to their new, safe and decent homes this year and that had been living in metal containers more than 20 years.

Learn more about the work Armenia is doing to get families out of domik districts and into safe, decent homes and neighborhoods.