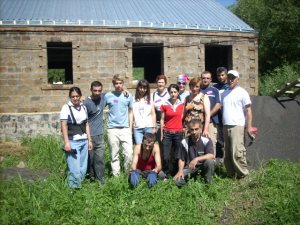 By Susan Bosovich who led a trip to Yeghegnadzor, Armenia in 2009.

Each year I tried to keep a journal during the trip. In 2007 I made it a team journal. Each of us took turns writing about the day’s events. Here are a few comments made by team mates:

David Adams – "This trip has been a surprise for me on several levels. Mostly, I never expected to meet so many people I want to keep in touch with afterwards. It’s remarkable how pulling oneself out of the regularity of life and into an unfamiliar situation can cause people to bond, be flexible, and make friendships that in our everyday lives might not happen."

Susan Scott – "Earlier in the day we did one of our “cultural awareness” exercises in which we briefly discussed the American perspective on the elderly with Armine, the volunteer coorinator, giving the Armenian side. She said that the radical changes in the country since the break-up of the Soviet Union has rendered much of the knowledge of older people irrelevant and has demoted their role in a society which used to more greatly value them."

Rhonda Whitman – "The weather forecast was for more rain today but it managed to stay at bay and it was nice and cool for shifting rocks up onto the roof top. Apparently the rocks are used for insulation. I could actually feel my muscles working which was great! It was probably our hardest work day yet.
Of course the usual large volumes of food was consumed but peanuts and almonds were added for some variety and Alex bought me some bananas! For dinner we bought some fresh produce from the market and the team cooked up a great pasta dinner which we enjoyed.

On a personal note, I was a bit unsure of what to expect from this trip. I think I came on board with lowish expectations but have been pleasantly surprised. The team is great! A variety of ages and personalities all with a zest for life and I have enjoyed chatting and getting to know the members of the group. I am grateful for such a lovely team which has definitely made this trip more enjoyable. It has also made me grateful and appreciate again all the things we take for granted in the west. Have also enjoyed staying in the local B & B with great hospitality rather than a generic hotel." 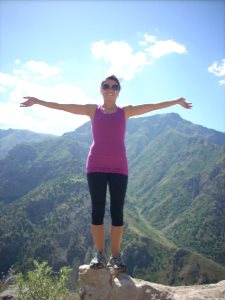 Sarah Horn – "We returned to the house on the far side of Shatin village where we had previously shoveled gravel onto the roof. Such gorgeous surroundings–the view was spectacular.

Today we filled each of the interior rooms with a gravel layer. The digging, passing and pouring of gravel-filled buckets was challenging and physical, but the team was particularly determined and up to the task.

Such a lovely family at this site, as well! The small girl and boy seemed particularly fond of our team and were eager to play and help out however possible.

I feel so fortunate to be on this trip and to have met the other team members- such a diverse and interesting group! I never expected to have so much fun."

And here’s my own memory:

After dinner one evening some of us decided to experience a little local flavor. We chose to visit a local artist where we enjoyed an enthusiastic greeting. He had a great desire to please us by showing us a multitude of his works. They were very interesting but halfway through the presentation the power went out. We scrounged for flashlights and candles using cell phone lighting (a first for me!). Several of us made purchases using a combination of Dram and Dollars to make our transactions.

After all purchases were made Armine, the volunteer coordinator, called for one cab. It was still pouring rain and the street was flooded. Seven of us piled into the small taxi, three, plus driver in front and four in back. (How many volunteers can you put into a taxi?) Fortunately he made it safely up the muddy, rutted road to the B & B. I added an extra 100 dram to our 300 dram (US equivalent of less than $1) bill for all the extra bodies. I should have given him more!

Register for a trip to Armenia or return to the Global Builders home page.