South Dakota, a state that I had never been to before this week and to be honest, knew very little about. This week has been quite the adventure from cornfields and flat lands that we passed on my first day riding with the team on Monday, to the Black Hills that we reached yesterday. I’ve had some unique experiences so far and have already made some great friends and reunited with old ones.

Monday was an easy, flat, and pretty uneventful ride to Parkston. It was a nice “welcome back” ride and kind of a teaser for the following day. Tuesday, on the other hand, was definitely one of the toughest, windiest, and most emotionally draining rides that I have ever had. The first 40 miles we battled headwinds as high as 22 mph and rolling hills. After we crossed the Missouri River at mile 60, we climbed for what seemed like forever up a hill. I must have averaged around 6 mph on that hill, and I remember cussing at it and wanting to give up. The next couple days seem like a blur. We had a 103 mile day that flew by compared to the 96 mile Tuesday, and a 50 mile day with headwinds stronger than Tuesday’s, but luckily only lasted for about 10 miles. 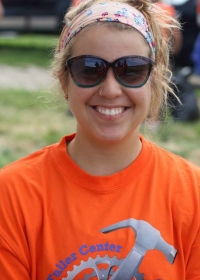 Thursday night we stayed in Porcupine, a part of the Pine Ridge Indian Reservation and we got a little history lesson about the Sioux Indian’s culture and how the Fuller Center is partnering to work with them. Friday was a build day and we worked mainly on a Vietnam War veteran’s home as well as one of the local woman’s home who has 6 boys and 2 girls as well as 9 puppies. Living in this community for two dayswas such a unique experience to me, and to witness how simply these Native American’s lives are and how beautiful the land is was very eye-opening. They make use of the resources they have, and live off the land. Yesterday we settled into Rapid City, South Dakota after a very pretty 86-mile day, including rolling hills, the Badlands of South Dakota, a nice local bike path, and a distant view of the mountains!

Being back on this adventure for the second time has been such a different experience. We are no longer a small, tight-knit group like I was so accustomed to last year. This group is a much larger one, full of kind-hearted people, and so diverse but united at the same time. There are a lot more segment riders, meaning that they join for only weeks at a time, like I am doing. Unfortunately, this makes it tougher to get to know each rider on a deeper level like I was able to for the most part last year. I have only been with this group of people for a week now but I feel like it has been much longer. The biking has been unbelievable. Since there are so many more people, there is always a cyclist in the distance that I can see or for me to ride with, unlike last year where everyone was so separated on the rides. I have ridden with my old pal Nicole most of the time, my best friend that I met on the ride last year. She leaves on Tuesday, which is bittersweet because I won’t have her here to share this adventure with but she is moving on to bigger things in Belize.

Today was my first off day and Nicole and I spent it biking around, got an ear piercing from the local Claire’s, you know…the usual. It’s amazing how much my perspective on things has changed so much in such a short time. When I first got here I was comparing everything to last year and became really emotional about how much I missed the old riders and our group dynamic. But, throughout this week, I have grown to love this new group of people and have become used to this dynamic and am growing to love it more and more every day. The church service we went to this morning was about bettering oneself, and I feel as if it was just what I needed. I believe that God has sent me on this adventure for a second time for a different reason, and to focus more on my personal growth as a Christian and adult. I can’t describe how open roads make me feel, especially the downhills where I just feel invincible, but I can say that it is definitely an amazing feeling.