Allen Slabaugh returned to The Fuller Center for Housing headquarters in Americus, Ga., filled with a sense of accomplishment … and a longing for his own soft bed.

Slabaugh, who leads our Student Builders program in addition to coordinating the Bicycle Adventure, led a group of cyclists on a cross-country journey from Seattle to Washington, D.C., raising money and awareness for The Fuller Center. In its four years of existence, the Adventure has raised nearly $500,000 to combat poverty housing.

Next year marks the fifth Fuller Center Bicycle Adventure, one that will feature two paths – one down the East Coast and one down the West Coast. You can learn more about that here.

After he settled in back to his "regular" job at The Fuller Center, Slabaugh sat down with Director of Communications Chris Johnson for a question-and-answer session about the Bicycle Adventure.

Being the leader this year for the first time, how was this Adventure different for you? 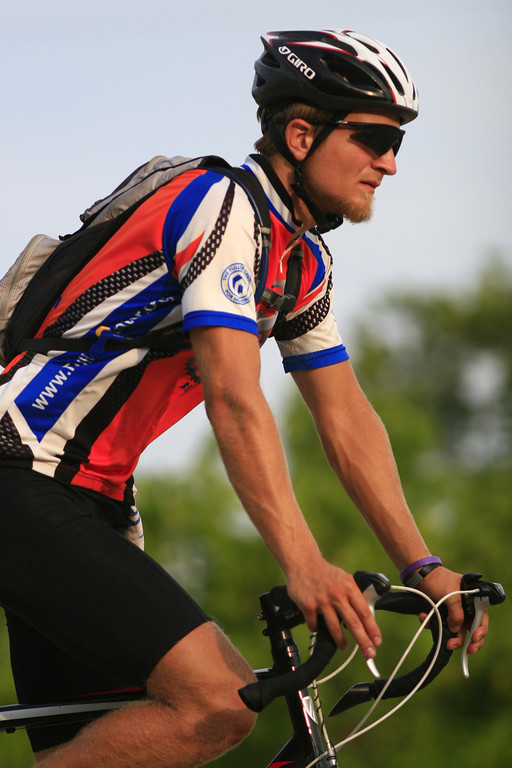 A lot. Being the leader, you’re sorta responsible for all the other riders. Whether it’s about getting food or taking showers, the decisions you make affect everybody. Last year, I could sort of worry about myself. But as the trip leader, you want to make sure everybody has everything taken care of – food provided, showers, a place to stay, places to stay for the next few days ahead. It’s a lot more planning and a lot more responsibility. But it’s still a lot of fun.

What were some of the more memorable moments?

I’d say – and a lot of the riders would say this – the first pass we climbed, Stephens Pass (Washington). It was about 1,500 to 2,000 feet of climbing. Most of us don’t live in areas where there are mountains, so that was a big challenge for us. And once we made it to the top, it was just a good feeling. It was a very rewarding feeling and helped people prepare for the rest of the way with the other passes that were coming up.

All of the stops were great, but there were a few that stick out like Hill City (Kansas). The people there just really welcomed us and opened their doors. A lot of the church families had us over for meals, and we got to spread out and get to know people throughout the community. They just did everything for us.

And the same with Carrollton (Missouri). That was another great stop in which the mayor gave us a proclamation. A lot of the members of the town there came out to greet us in the town square. The Chamber of Commerce there bought us ice cream and let us use a trolley to go take showers.

Another memorable moment was the Bloomington (Illinois) build. The lady there was in need of a new front porch, new steps and new windows. We were able to put in new windows, a new porch and new steps. Just seeing her face at the end of the day and hearing her comments about how excited she is that she can invite people over to her house, that she’s not ashamed of it anymore. She’s looking forward to the next time she can tell people to come over. She’s fallen on the steps many times, and now she has sturdy steps. That’s something that really means a lot to her, that she doesn’t have to worry about falling. And hearing her kids say the same things like “I can’t wait to have my friends over.” … It brought back pride to their home and to the family.

What were some of the weather extremes you faced?

The worst was going up Berthoud Pass (Colorado). Throughout most of the day it was probably 70 or 80 degrees, basically sunny. We got to the top of the pass. Once we started making our way down, it started sleeting. It just got freezing cold. The only thing I had was my rain jacket, no other long sleeves. The rain was coming down too hard and I couldn’t see. I wasn’t able to breathe because of the elevation, plus the cold. I pulled over to the side with another rider and we ended up hitchhiking our way back up to the top of the mountain to wait out the storm and then head down. That was a scary moment, going down this pass at 20 to 25 miles per hour, and it’s freezing, you can’t breathe and you can’t see. You’re in the middle of nowhere.

Another one was going up Stephens Pass. It was 28 or 29 degrees once we got to the top of the pass. But when we slowly went down over the Cascades the weather was like 70 degrees and sunny. It was amazing how different it was. It was just absolutely beautiful. It was probably the most beautiful ride that we had.

The hottest was probably Kansas. One of the days was like 100 degrees. And Missouri was really hot. It only got in the high 90s in Missouri, but the humidity was a lot worse.

We actually didn’t run into too much bad weather. We only had one rain delay – in Illinois. 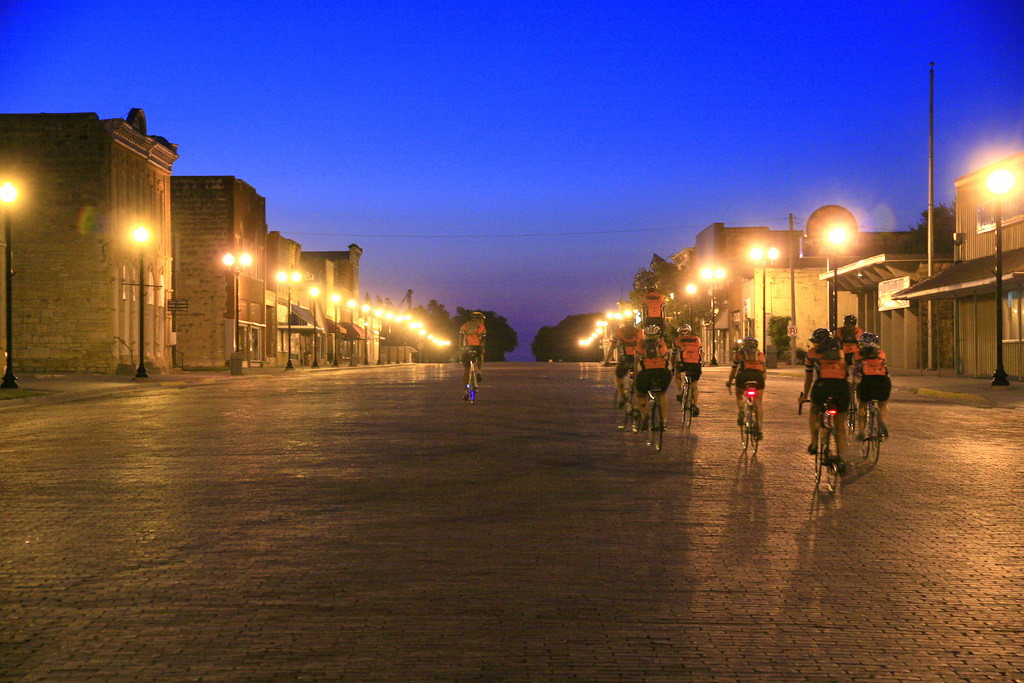 What do you think makes people want to go on this Adventure? I mean, we’re talking 3,600 miles!

Some are just looking for a way to just get away from things for a bit. Maybe they want to have one last great adventure before going to college or starting a job. This is something that provides that for them and gives you a lot of time to think. Being on a bike just allows you to live for nine weeks and not have to worry about anything. You get to go out and meet people, support a great cause and have a great adventure where you get to see the country like not too many people have – on a bike. You take back roads and go through small towns, not on the interstate.

I think we were able to tell a lot of people about the Fuller Center. We probably had more news stories than we’ve had in the past. We had a chance to speak to churches about The Fuller Center, and the ones we did speak to seemed very excited about what we’re doing and want to get involved. They were asking about ways they could get involved and asked us to keep in touch with them.

But even when we weren’t making presentations, we had an opportunity to meet many people along the way, even if it was just at gas stations where we would stop and get a chocolate milk or something and everyone wonders “What are all these people in orange shirts doing?” You get to tell them what you’re doing and why you’re doing it.

I think this summer was very effective in helping to raise awareness for The Fuller Center, including on Facebook and blogs – a lot of the riders had their own blogs. And that we had thirtysomething bikers. That was big in itself with all their friends and family following us and telling their friends what they’re doing. And it trickled down to people all over. 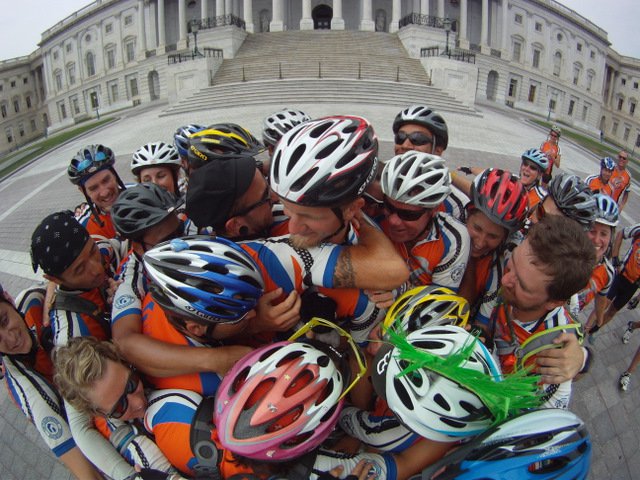 So what’s going through your mind when you see and ride up to the U.S. Capitol building, the official end of the ride?

It’s hard to describe. All these miles and all the hard work and all the planning, it’s just all coming to an end and it’s actually happening. You’re actually arriving at the Capitol. I started to think about all the past experiences we had as a group, all the great stops we had, all the hard work that was put in, the struggles and the stresses – everything that led up to this point.

It was a happy moment but also kind of sad because it’s coming to an end and you’ve got to say goodbye to all these people. Then again, it’s great because you just biked 3,600 miles and here you are at the Capitol building. Back in week two, we were thinking we’ll never get there! It’s like there are 3,000 miles to go and it’s never gonna end. But once you start seeing the Capitol, it’s very exciting. And I was excited to see how happy the rest of the riders were and to see them make it safely. It was a great experience to see them celebrate and accomplish something that maybe they thought wasn’t possible before this. Maybe they’d come into it with a little bit of doubt, but here they are standing at the Capitol building after biking 3,600 miles.

OK, so it’s Monday and you’re back in Americus – what’s the first thing you’re thinking about? Jumping into your own bed?

A bed is nice! That’s all I could think about driving back 13 hours from Washington, D.C. – it’ll be nice sleeping in a bed and not having to get up at 4:30 in the morning to try to beat the heat. I can sort of sleep until my body tells me to wake up, and I don’t have to sit on a bike seat for eight hours a day. I can bike a mile or two to work, and that’s it. It’s nice to be able to relax a little bit, regroup and sort of think about the experience this summer.

What’s the best thing about cycling coast to coast?

And all these small, little towns that you’d never stop at if you were trying to get from Seattle to D.C. by car. You’d try to get there as fast as you can. Stopping in some of these little towns, you meet some of the most amazing people, people who will do just anything to help you out. It seemed like every stop someone would do something for us that would just blow us away. What great examples of being servants of Christ and putting faith into action.

Just getting up and riding every day. Some days you feel a lot better than others. Then there are other days where your legs are tired and maybe you didn’t get much sleep the previous night. You’ve got like 90 miles ahead of you, and it’s just mentally tough. Toward the end of the ride, you start to get to the point where physically you can do it. Your legs have gone through a lot. It’s not going to be a problem physically; it’s more mental. There are some days you’re just tired and you have to overcome that temptation to want to get off the bike for a while and get in the van or something.

Any thoughts you’d like to add about next year’s ride?

I’m very excited for it. This year was a huge stepping stone for The Fuller Center and the Bicycle Adventure in general. We actually had 36 riders at one point. Seeing it grow the way it has from year one to year four has just been amazing, and I’m really looking forward to the growth next year. We’ll have two separate rides, and hopefully we’ll have 30 on each one. Getting 60 people involved in riding is going to be exciting. We’re going to hopefully raise more than we’ve ever raised and get the word out there. I’m interested to see how these two routes are going to play out as we start planning them and see who joins and seeing the dynamics of the group.

It’ll be our fifth-year anniversary. Let’s see how big we can really get this.