It’s Thanksgiving Day. A time to be with family or friends and count our blessings. It’s a rare moment for most of us, for although we vaguely realize that we have been given much, on a day-to-day basis it seems that we can’t help but get caught up in pursuing what we don’t have while ignoring what we already do have. Sometimes it takes a dramatic life experience to shift our view back into focus; I had just such an experience during my recent trip to Africa.

During my two-week journey I had the opportunity to visit two of our international Fuller Center partners: Nigeria and Sierra Leone. Nigeria is the eighth-largest country in the world and one of the leading countries in Africa in terms of development, vision, and resources. It’s also a country with an acute housing need, where an estimated 16 million additional units are needed to meet the current demand, making homeownership for most–especially the poor–nothing but a dream.

Our program is led by the dynamic Sam Odia, an architect known as one of the leading housing experts in Nigeria. He has pioneered what we are calling an incremental housing system, in which the Fuller Center constructs very basic one-bedroom, 240-square-foot “starter houses.” Then, once the family has built up equity in the home through repayments on their no-profit, no-interest Fuller Center loan, we can help facilitate obtaining larger, two-bedroom homes with otherwise difficult-to-obtain bank or government financing. 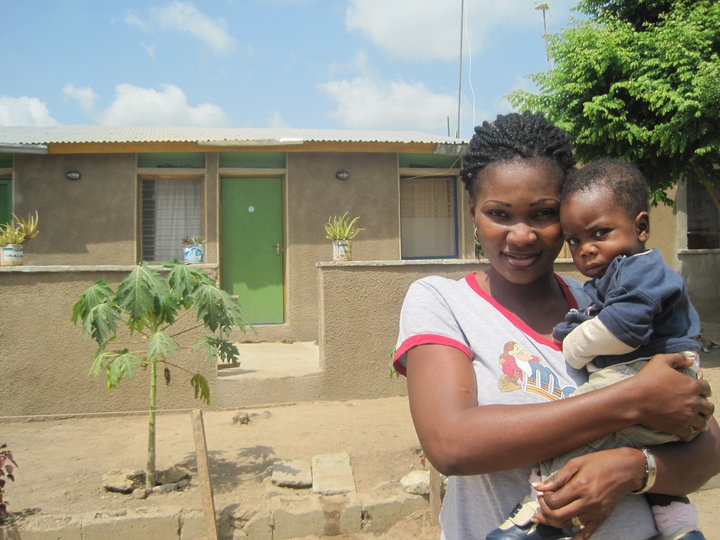 In a country where initiating new construction and obtaining land title can be extremely difficult, we have reached a place where we can build virtually as many homes as donors will fund for $3,500 each. We have completed 54 of these basic homes to date in a village named Luvu outside of the capital of Abuja, and from the moment I arrived I was eager to put my own eyes on the place.

I was not disappointed! “The Fuller Center Housing estate,” as they call it, was beautiful. There are neat little yards, Pawpaw (Papaya) trees bearing fruit, and most importantly, very happy homeowners and children. Person after person issued warm welcomes, told me how much they loved their homes, and asked about the well-being of the Fuller Center volunteers from the United States who had come to help build them. These people, who to us would seem as if they had so little, did not seem to have any trouble remembering how much they had to be thankful for.

Soon it was time to say goodbye to my new friends and begin the journey to Sierra Leone, which would take place over two days by way of two flights and a small boat. As one of our newest programs located in one of the world’s poorest countries, I was unsure what to expect. When intense stomach issues and fever struck me mid-journey, the temptation and desire to turn back became almost irresistible, but by the encouragement of others I pushed on. It may have changed my life.

Sierra Leone is a small, beautiful country on the coast of western Africa. A disastrous civil war that ended seven years ago left the country with one of the lowest United Nations Development Index scores in the world. The lack of infrastructure is compounded by the fact that the war caused the population of the capital, Freetown, to jump from 300,000 to over 2 million! And yet everyone I saw always seemed to be hard at work–selling goods, carrying various items, running small stores–exuding friendliness and a sense of optimism. I witnessed an intense game of soccer consisting entirely of war amputees that seemed to embody the people’s resolute spirit.

But our work is not chiefly in Freetown, it is in a rural area named Grafton 45 minutes outside of the city. You could call it a suburb, but instead of imagining neat little houses in rows, try to imagine some of the worst poverty you can comprehend. As people fled the battles in the countryside–often following the burning or destruction of their villages and the death or dismemberment of family members–they were drawn to this area, a place where the population grew from 100 residents to over 24,000. 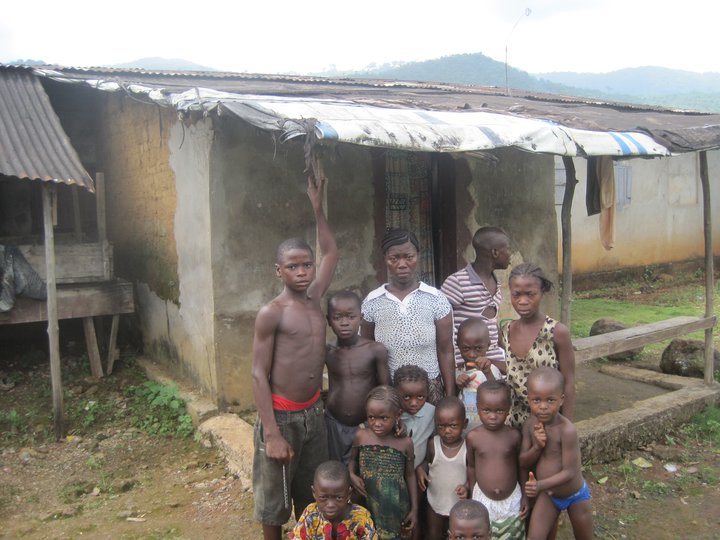 The living conditions are, in a word, tragic. People are living in tents, tarps, houses of mud. Sanitation is minimal. The conditions are perhaps similar to what we found in Haiti following the earthquake, but here it has become seemingly permanent–and worse, the people have become forgotten.

As I walked through the villages taking pictures of families in front of their “houses” (always 10-15 people per shack, mostly children, many of whom are orphans), I heard story after story that would break anyone’s heart. Two boys told me how their brother had gotten sick and died because their house couldn’t keep the water out during the three-month rainy season. Another family couldn’t send their kids to school because they needed them to look for food for the family; the parents couldn’t look for food themselves because if they left the house the thin walls would be cut open by thieves. Each family’s story was different, yet each was the same.

Nowhere else have I seen firsthand such dire need, and nowhere else have I felt simultaneously such pressure and opportunity. Pressure, because with so much need, so little international awareness, and so few other organizations at work in the country, I left the villages knowing that God has allowed the future of those children to literally rest in our hands. If we don’t do something for them, no one else will. Opportunity, because here we can do something that will truly impact some of the world’s most hopeless and vulnerable. It is an opportunity for each of us to do something with our own lives that has real significance, real meaning. With an extremely talented and dedicated leadership team of Sierra Leoneans in place, 10 acres of land on hand, and our own brick press, the only thing impeding progress is funding. For every $5,000, 10-15 of the world’s forgotten will have not just a new home, but a brighter future.

Before I left, they allowed me the privilege of handing over the keys to the first house we had just completed. It was to a family that used to live in a dilapidated structure unable to keep the water out from the rains above or the floods below.

As the mother joyfully walked into her home she excitedly raised her hands in the air and spoke happily in her native tongue, Krio, which has some similarities to English. After exclaiming “Bye bye water!” she continued to say over and over again the only word in Krio that I had learned: “Tenki,” which means “Thank you.” Instead of water flowing through the roof and floor, it now was only flowing from our own eyes. This family knows what it means to be thankful. They will not forget. Indeed, it was unforgettable.

Likewise, I cannot forget that family or the many more there in great need; neither can I forget my own reasons to be thankful, of which there are so many. It is my hope that, perhaps with the help of those reading this, we can give many more families a reason to be thankful this Thanksgiving season as we redouble the time, efforts and resources we put towards this blessed work.

To contribute toward a $3,500 house in Nigeria click here.

Prefer mail? Make a check to The Fuller Center and send it to: