(Photo: With the help of the Advanced Rural Development Initiative, of which Fuller Center for Housing Armenia is an implementing partner, Amalia Evoyan was able to add a greenhouse to her family’s land and can now grow vegetables for sale nearly year-round.)

To achieve their goals, however, they would need implementing partners who had already demonstrated success in empowering Armenian families. They found the perfect partners in Fuller Center for Housing Armenia and Heifer Project International’s Armenian branch office.

Palyan said that the program has been an overwhelming success and that she would love to see the program extended beyond its current end date of September 2018. She said she would love for the beneficiaries to continue their success and inspire continuation of the program. She also shared a handful of success stories from the ARDI program: 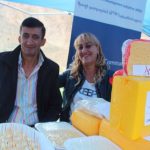 Avag Nazaryan’s family owns a small farm with 40 dairy cows. They had the know-how and experience in cheese making, but they wanted to take the business to the next level — something that would require financial investment.

An ARDI grant helped Nazaryan purchase a vacuum-packing machine that increases the shelf life of the cheese, enhancing its safety and marketability. Their cheese made its way to Yeghegnadzor groceries and restaurants — and even in the big-city Yerevan supermarkets, including Yerevan City and Titan. Sales surged in their first six months since joining the program with distribution of six tons of cheese. They have since launched new lines as expansion continues.

“My goal is not only to enhance my family business but also to increase employment in the region,” Nazaryan said. “With new jobs, we can help our families to stay in the homeland and have income.” 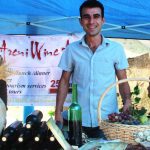 David Simonyan, 24, is a hard working entrepreneur in the village of Areni, famous for its Areni grapes and wines. In 2014 he forged connections with various Armenian tour agencies and applied his family’s unique talents. He offered visitors to the village homemade lunch prepared by his mother and homemade wine made by his father. He also offered hiking tours and then expanded lunch offerings to include agritourism activities in which visitors to engage in wine making, bread baking, honey straining and cheese making.

Thinking bigger, Simonyan participated in ARDI’s entrepreneurial training and successfully applied to the project’s Small Grants Program. With significant investment of his own and microfinancing organizations, he turned his family’s home into a thriving bed and breakfast.

He remains determined to forge new partnerships in the community. In fact, a neighbor who worked with ARDI to develop a dried fruits operation now provides those products for the guests at Simonyan’s bed and breakfast.

“I really hope tourism develops in Areni village,” he said. “The opening of more hospitality centers will enhance our competitive advantage in the tourism market.” 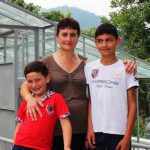 The Evoyan family use every inch of soil on their small patch of land where they maintain a number of plants, trees and beehives. After completing ARDI entrepreneurship training and then receiving a small grant, she was able to establish a greenhouse that will operate nearly the entire year producing tree seedlings and produce— including tomatoes, cucumbers, peppers, onions, coriander and parsley.

“I am excited not only that this is a new, diversified income for my family but also that it will save time and efforts for the neighboring communities to travel far for such produce,” said Evoyan, who moved back to her ancestors’ Yeghegnut village after the 1988 earthquake destroyed the family’s Vanazdor home. “After expansion, it will enable and open new employment opportunities for neighbors. 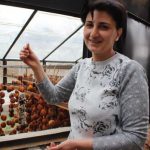 Susanna and Arman Asatryan have been engaged in rural tourism since 2013, running a unique tasting hall for their local products. Services include homemade meals and appetizers, as well as sampling of local wine, vodka and dried fruits.

Though their hall was already a destination preferred by several tour operators, the Asatryans were able to expand with the help of a small seed grant from ARDI. This grant, coupled with their own hard work and investment, helped them more than double the hall’s space from 20 square meters to 45 square meters.

Now, they are able to host more and larger groups, allowing them to not only increase their income but also to hire more people and create jobs in the community. 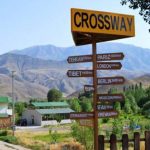 Svetlana Sevlikyan and her husband established their “Crossway” camping retreat in 2013 next to the crossroads of the Yerevann-Tatev-Sevan highways. It’s a beautiful area with decorative and fruit trees, a small fishing lake, camping areas, cabins, a swimming pool and a kitchens and bathrooms for those staying in tents.

There was just one problem — they were able to operate only in summer months and relatively warm spells of spring and autumn as cold weather and high energy costs put a dent in their business.

With the support of ARDI, they were able to buy two solar water heaters that decrease costs on utility payments and enable them to entertain guests anytime, not just during the summer. In 2016, business soared 59 percent.

Learn more about the ARDI program