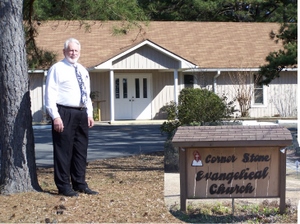 A few years ago I introduced Walt Barfield to Millard Fuller. Since then Walt has stayed in touch with the Fuller Center. I didn’t know that. Walt is the pastor of a small Evangelical church in the Arkansas lake country, north of Little Rock. On a good Sunday Cornerstone Church may have 30 in worship. Cornerstone is not a CBF church, nor is it Baptist. Nevertheless, it was the first church to make a donation to CBF-AR two years ago when a killer tornado hit the church’s area. Walt and Liz are faithful givers to CBF.

About a month ago CBF-AR Coordinator, Ray Higgins and I discussed visiting Cornerstone, where both of us have preached, to support Walt’s ministry. We set March 7 as the date. A few days before that trip Walt sent me an email saying that he was praying for me and my work for CBF in Haitian response. He further mentioned that he hoped his church could build a Fuller house in Haiti and was praying for $3,000.

I couldn’t get his dream out of my mind and began thinking that if little Cornerstone could build a house why couldn’t others? Why did I need to seek help from just CBF churches? I decided that I would take Walt’s vision and begin seeking others to join him. Perhaps Catholic Charities, who have helped us so much in the past, would help. Perhaps many others, and why did it have to be a church? What about the Rotary club?

The Sunday came and we went north for an hour and a half. Walt greeted us at the door and handed us a bulletin. Not only had he written about our being there and our CBF work, there was also a Fuller Center insert about new houses for Haiti. “Where did you get this,” I asked? “Off the internet,” he replied. The service started. Soon Walt called the 24 attendees’ attention to the insert and explained that he and Liz had been praying for enough gifts to sponsor a house and to date they had pledges of $3,800! Wow, more than enough. Then Walt introduced Ray and me and invited us to say a word from the pulpit.

I told the group about the email from Walt and how moved I had been. I explained that CBF has a partnership agreement with Fuller to build as many churches in Haiti as possible. Because of Walt’s compassion I was going to begin making other groups aware of the need, and to urge them to follow Cornerstone’s example. I noticed that Walt was crying. As he came back to his pulpit and before he composed himself, a voice from the rear of the sanctuary called out, “Wait a minute pastor, here’s a check for a house”. A lady whose husband had recently died laid a $3,000 check on the altar as applause erupted. Walt again tried to respond as the Spirit-filled room took on a life of its own.

Yet another lady walked down and handed still another check with the statement, “This is made out but not signed, this is a challenge to Cornerstone, match it and cash it”. It will be matched. If you have lost count, that’s four house and $12,000! And there were only 24 people there.

This morning I received another email from Walt. In part it read, “Often I have wondered if anything good could come out of Cornerstone? I guess I got my answer today.” Yeah, Walt, I guess you did.

After this was written, Walt’s congregation kept right on donating. Read more about the church’s Haiti response here.

And for photos, videos, press coverage, other stories and to follow The Fuller Center’s progress in Haiti visit the Haiti page.

Or, sign up your church or other organization to be part of the initiative here.