View many more photos from the Legacy Tour of Allendale by clicking here. 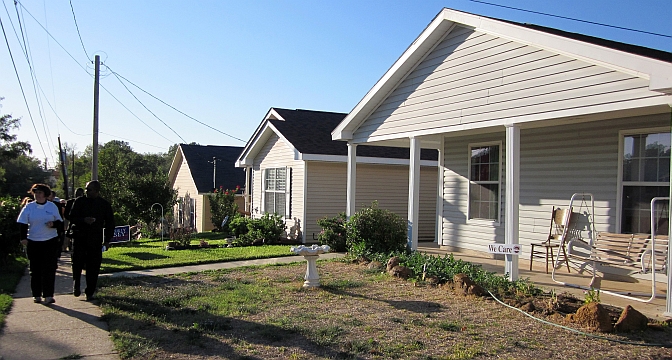 SHREVEPORT, La. – While volunteers hammered away at the Millard Fuller Legacy Build in Minden 30 miles away, a group gathered Wednesday in the Allendale community to view how The Fuller Center for Housing with its Northwest Louisiana covenant partner has transformed a once drug-fueled, crime-ridden community into a flourishing oasis for families.

“The Fuller Center went to Shreveport as a result of Hurricane Katrina to help with some of the refugees who’d fled the storm,” Fuller Center for Housing President David Snell said. “What came out of Allendale was one of the greatest examples of community renewal.”

The trip to Shreveport had a second purpose. FCH of Northwest Louisiana and homeowners in the neighborhood have planted a live oak tree in honor of Glen Barton, the former vice president of U.S. field operations who died in August.

Few are more passionate in talking about the transformation than Lee Jeter, an ex-Marine who leads the Fuller Center of Northwest Louisiana. He’s seen the change in the hearts of the community, in the lives of families and in statistics.

“We want you to look around at the change in this community,” Jeter told the crowd assembled at Our Lady of the Blessed Sacrament church on the edge of the neighborhood. “The crime rate has dropped 80 percent since The Fuller Center began building homes in the Allendale community. People in this community who didn’t trust anybody are now beginning to trust us.”

The group walked the streets of dozens of homes. Lee pointed out where a liquor store once stood and was the hub of undesirable community activity, as well as “The Hill,” where drug use and crime was rampant. “The Hill” is no more, only a beautiful slope of homes with the sights and sounds of children playing.

“We’ve got do what Jesus said, to go there and spread the gospel, and change this world one community and one house at a time,”. That is our mission. That is our calling. That’s why we’re here. That’s what we’re supposed to do.” 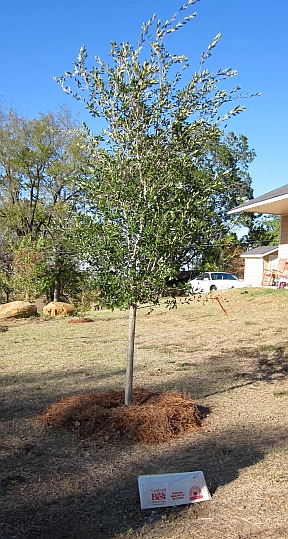 When Fuller Center co-founder Millard Fuller was encouraged to step in and see if he could help lift up the impoverished Allendale community, he said yes. And he immediately turned to Glen Barton to become his “boots on the ground” in Shreveport. Barton, who had worked with Fuller at Habitat for Humanity, accepted the challenge.

And Allendale was forever changed.

“Glen Barton went to Shreveport on a short-term basis to help get the project started, but he wound up staying almost two years there,” Snell said. “And in doing so, he became a friend to countless people there. He put folks into houses, and they are truly grateful.”

A testament to his service to the community now grows in the heart of the neighborhood, a live oak tree planted in his memory. At a service around the tree Wednesday, letters and poems were read, songs were sung, and thankful homeowners wiped away tears and hugged Glen’s widow, Brenda Barton. 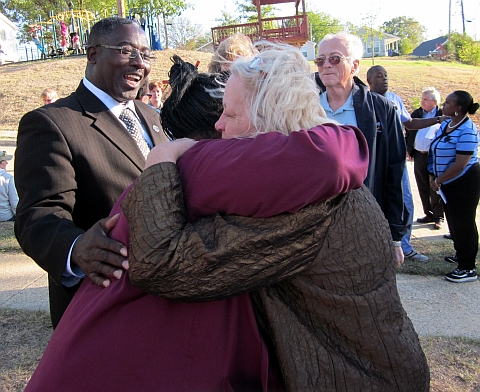 th,” Brenda said of the visit. “Seeing the homeowners that we’d worked with was really heartwarming. It was really good to see how everything’s continuing to grow.

“Glen would definitely be very proud of the way it’s continuing,” she added. “Not only he and Millard, but there were so many who came in and gave so much. And many are here at the Legacy Build. It took a lot of people to do it.”

Of course, Brenda wasn’t the only one wiping away a few tears when the tour arrived at the live oak tree planted in his honor. Felicia Sewell was one of those. And her young daughters Makaila and Miracle were especially fond of Glen Barton.

“He always was working,” Sewell said. “He had the tenacity to make things happen. He did whatever it took for the homeowners here to get into our homes. And I will forever remember his smile, and he and Brenda coming in on Saturdays and Sundays working late into the evening. They were a blessing to my family. If it wasn’t for Glen Barton, I wouldn’t be here today.”

View videos of the Allendale tour and the Glen Barton memorial tree service below: