Today I had the opportunity to visit with Orie Lehman, a general contractor and a member of the Lagrange-Elkhart, IN Old Order Amish Settlement.  This community was founded in 1841 when four Amish families of Somerset County, Pa. moved onto newly acquired farms southeast of the village of Goshen, Ind. 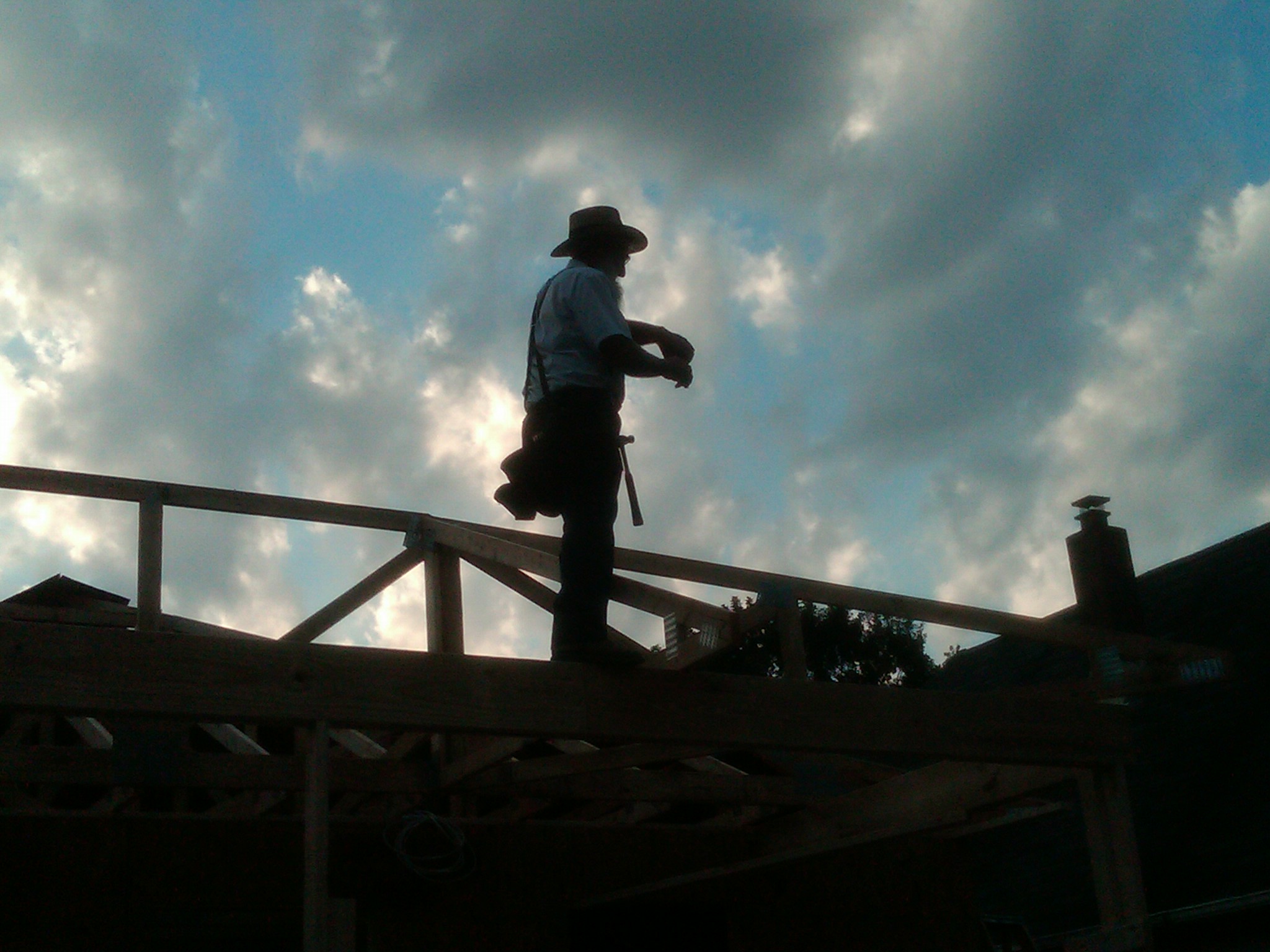 Through the invitation of our Board chairperson LeRoy Troyer, Orie and his community have become good friends of the Fuller Center. They’ve been on several FCH builds–including our major efforts in Shreveport, La. and Lanett, Ala.

Many of our volunteers have observed the construction skills of the Amish crew over the years and their speed and quality of work is almost taken for granted.  But I wanted to learn a little bit more about their motivation for joining us on the builds. Orie had been very generous of our communication department’s interest in taking their photos, and I hoped that he would be as generous with my questions about his faith and his community traditions.  Though I was unsure if he would take the time to visit during a quick water break, Orie spoke with me for a long time, enthusiastically answering each of my questions, beginning with, "For you, what is the most important faith statement of a build effort like this?"

Orie replied without hesitation as if he had been thinking about the question for a long time.  He said, "It is a heart issue. It is pure undefiled religion.  The Bible instructs us to serve the poor, the widows and the orphans.  Helping people in need is pure religion.  When we serve man, we serve the Lord."

He explained, that on these builds, it is certainly a way to give back God’s blessings, and it is a way to be a witness, but he finds deeper meaning, "Here we have the spirit of the Church of Jesus Christ, unified with one another as followers. Strangers come together and denomination doesn’t matter because we have this common bond.  And when we discover what we have in common it is comforting."

He went on to reflect, "If it is not comforting, then something is wrong with the matters of our head and our heart."

We visited much longer discussing his community, their growth and their 90 percent retention rate.  Orie explained in details the professions of the others in his group on this build.  We also discussed our thoughts and observations of two tragic events that brought our usually separated worlds together for a moment.  We shared our personal observations about the various responses of Christians to the terrorist attacks of Sept. 11, 2001 and the horrific shootings at an Amish school house in Nickel Mines, Pa. on Oct. 3, 2006.  I’ll save this intimate conversation for another day and another format, but will share an observation: the Millard Fuller Legacy Build proves that it doesn’t take a large tragedy or a national disaster to bring strangers together to work on a common cause of the good of the community.

Orie could see the skies were threatening rain and he headed back to help his team get their house "in the dry."

Later that afternoon, I felt privileged to drive Allon and Doris Lefever to their hotel so they could pack and catch a flight back to Harrisonburg, Va. Allon serves on our Fuller Center board and among many of his career achievements he used to be the director of the MBA program at Eastern Mennonite University (which is a pretty good place to find a wife…but that is another good story for another time).

Having Allon as a captured audience in the truck, I asked him the same question that I asked Orie Lehman, "What is the most important statement of faith about one of these build events?"

He said, "I’m going to answer something that may sound a little less spiritual perhaps. But what I think it is so important about our ministry is that we create dignity.  We create the opportunity for dignity in the process by having the homeowners work alongside us.  They are not getting a hand out, but rather a hand up and it was a great joy to see the homeowners building the house with us."

Allon has served on boards of more than 48 organizations, helped found 16 private and six public companies, and so his insight was very important to me.  His observation was what business people call "bottom up" empowerment.

But, I think his hesitation to call it a faith statement is unnecessary. Dignity is not just a spiritual experience, it is an expression of faith in the value of each of God’s children no matter what their life situation has to be and the hope of better things to come on earth as it is in heaven.

I’ve been blessed today by asking some questions and getting a peak through the window of the heart of some very special people.  There are theologians all over the job site. I can’t wait for tomorrow to come!