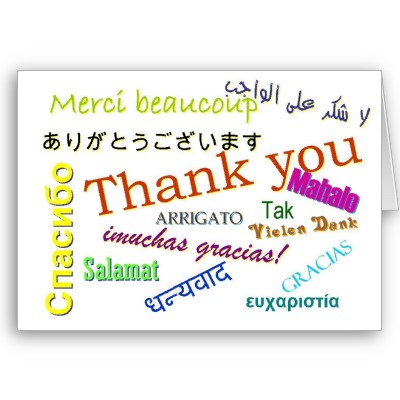 It was 1982. “The Dukes of Hazzard” was my favorite TV show. I was listening to Men At Work on the radio. My cheap dad finally bought a VCR. And I helped someone with a math problem.

Really! I’m not making this up. Yeah, I know I can’t help my 11-year-old son with a math problem now, nor could I help him with his second grade math work, nor would I know a quadratic equation if I stepped on it in the backyard. But for one day in 1982, I was considered a math wiz.

There was a new kid at Macon County Junior High School in Oglethorpe, Ga., that year and he had no clue how to even start to find the square root of a number. I know how he must have felt that day because I can’t do it now without a calculator. But, in 1982, I did know how to do it.

And when no one, including our seventh-grade math teacher and the top math students, was willing to sit down with him and show him what his previous school should have, I did. I didn’t know the kid, and he didn’t know me. But I helped him. And when I was walking home, crossing through the crosswalk, he stopped me about the time I got into the middle of the street by yelling from the sidewalk.

I don’t know why that memory has stuck with me through nearly 30 years. Maybe it was because I knew it was heartfelt. Maybe because I’d heard empty “thank yous” so many times before. Maybe because I was still standing in the middle of a crosswalk and was about to get run over by a dump truck. Whatever the reason, it stuck with me.

During our most recent Bicycle Adventure, some of the participants asked me about writing letters to mayors and such to thank communities for the above-and-beyond hospitality they encountered stop after stop. Because I feared such letters might get lost on some official’s desk, I offered an alternative: writing letters to the editor of newspapers along the way. That’s what we did, and dozens were published and seen by thousands of pairs of eyes.

It not only gave us a chance to say thank you; it also got The Fuller Center for Housing‘s name in print from coast to coast. We were able to say thank you and garner even more publicity … for free.

That’s one of the beauties of utilizing the “letters to the editor” section of a local newspaper. It’s free. It’s your voice. It’s your agenda.

During my 22 years of full-time newspaper work, I got one or two or a billion angry letters, phone calls and emails about how we hadn’t covered an event to someone’s liking or not covered it at all. Or that we were complete bozos. Eventually, all journalists give such angry folks an option: “Why don’t you write a letter to the editor?”

It seems so simple, yet so few do it. Trust me, this is one of the easiest ways to get publicity for your organization. Find a reason to thank someone, and you can use it as an opportunity to also spread the word about your great work through The Fuller Center for Housing.

At the bottom of this blog is a letter written by our friend Judy Blalack, who leads the Silver Valley Fuller Center in Idaho. Though Judy is a wonderful communicator, as evidenced by having one of The Fuller Center’s best monthly newsletters (click here to see her November newsletter) she likely submitted this letter merely to show appreciation for the support of their recently opened ReUse Store, which has been busier than they ever expected.

So follow Judy’s lead and take advantage of a free way to say two of the most valuable words on the planet, “thank you,” and help share our mission with the world at the same time. 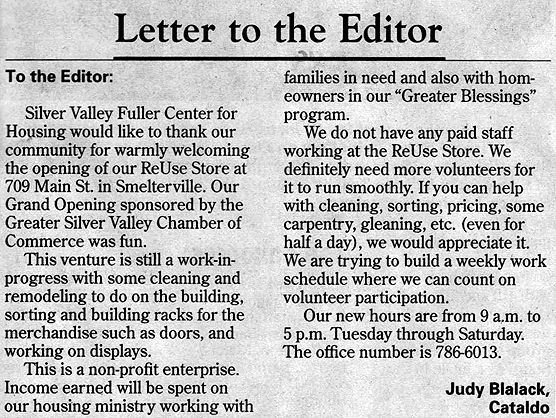