ST. JOSEPH, MICH. – Standing on the shore of Lake Michigan, 16 cyclists clad in orange dipped their back tires in the cold water on Sunday and yelled “Oyee!” to honor Millard Fuller and officially begin their 1,300 mile ride to the Gulf Coast of Florida. The second annual Fuller Center Bicycle Adventure is now on the road, raising $200,000 to help end poverty housing and spreading the word about Millard’s mission to make life better for those in need. The team already planted the seeds for one new Fuller Center covenant partner, and are on their way toward strengthening others. 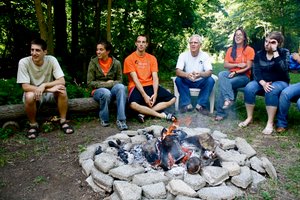 Sunday brought with it a flurry of firsts. Trip leader and Fuller Center Director of Special Programs, Ryan Iafigliola, welcomed supporters from the area interested in starting the Berrien County Fuller Center in Michigan. On Saturday, he met with the two people who were spearheading a local movement to start up a housing repair ministry that involves the entire community.

“Several people had been on a mission trip with another housing group and returned wanting to start their own,” said Ryan. “But the idea of building a house-repair ministry from the ground up seemed too intimidating. The Fuller Center is helping them think through the details.”

Further good news for Michigan’s second Fuller Center is the support of Harbor Habitat for Humanity, a group that exclusively builds new homes. Ryan said that when he spoke to Harbor Habitat and leader Mike Green on Friday, they expressed excitement and a willingness to work cooperatively with a repair ministry in the same area.


The sendoff ceremony was opened with words from Fuller Center Board Chairman LeRoy Troyer, who graciously welcomed the cyclists into his home for food and fellowship on more than one occasion. 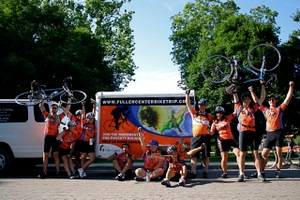 The Fuller Center would also like to thank Hub and Joan Erickson, two important supporters of our mission, for opening their home and refrigerator to the cyclists, and for cheering them on at the start of their ride.

For more news and photos from the cyclists’ adventures, personal stories and details about each day’s ride, please visit the bike trip blog, fullercenterbiketrip.blogspot.com, for regular updates from each of the riders. Click on the comments section to leave much-appreciated words of encouragement, and donate toward their goal of raising $200,000 to end poverty housing!