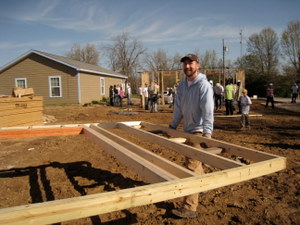 Shreveport, La. is where Fuller Center building first began in 2005, and it’s where the walls of two homes are going up this week and next as part of the 5th Anniversary Build celebration.

Shreveport’s Yolanda Braziel had to use her work gloves to wipe tears from her cheeks as she watched about 50 volunteers–many of whom are college students–putting walls up around the foundation of her new home. (Read how Braziel got involved with FCH here.)

"Look at these people. They gave up their spring break. Do you know what a spring break means to a college student?" she asked. "To decide to give that up and assist my family? Who are we? They don’t know. And they’re out here happy, excited and working. It’s just overwhelming."

The University of Idaho sent a team of students to volunteer this week with The Fuller Center of Northwest Louisiana as part of an alternative spring break program. The students left the snow in Moscow, Ida. to sweat in the southern sun while helping FCHNWLA raise two homes in the Allendale community.

"I’m glad I get the opportunity to come help," Anna Roberts, a 22-year-old Moscow native, said. "I love that [Yolanda] looks so excited. She’s really happy. I think that makes it worth it."

In addition to the college students, volunteers will come and go throughout the next two weeks from Americorps and Shreveport’s Job Corps and Bossier Parish Community College as well as Texas, Minnesota and Georgia to help build and celebrate five years of homebuilding. Forty students from the University of Minnesota are expected Tuesday and Wednesday. 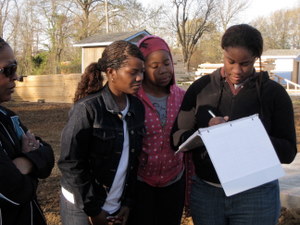 Those five years have especially been significant to the second homeowner in Shreveport, Delisa Robinson, who moved to the city after her home in New Orleans was destroyed by Katrina in 2005.

What she remembers most about growing up in New Orleans is the way everybody knew everybody else in their neighborhoods and looked out for each. She and her son Leon, 16, haven’t experienced anything like that yet in Shreveport. But they are hopeful that their new neighborhood in Allendale will be a chance for that sort of community.

"They’ve got some nice people around here," Robinson said. "I think we’re all going to stick together."

In addition to the work in Shreveport (which will continue for two weeks, March 15-27), volunteer teams are working hard with the other Louisiana covenant partners. Find out more about the other build locations here.

You can find more about the build’s schedule and locations here.