For the second straight year, a huge team of Wittenberg University students on spring break drove to the Southeast last week — not to hit the beaches but to hit nails … a whole lot of nails.

Fifty came from the Springfield, Ohio, school for alternative spring breaks last week — driving hundreds of miles before splitting into five groups working with Fuller Center for Housing covenant partners in Atlanta, Perry, Americus and Albany in Georgia and Tallahassee in Florida.

Here is a location-by-location glance at the students’ stops along with additional links to media reports and more: 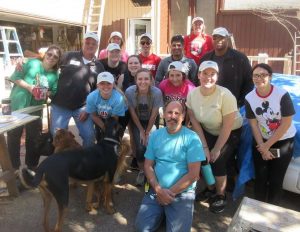 Board member Jackie Goodman made sure that students got an overview of the many sights, sounds and tastes of the Atlanta area, while Director Mark Galey kept the students busy during the day, including a project for a Jewish family. At a time when anti-Semitic acts have been rising, Galey was glad that the students could express their Christian love for others while witnessing The Fuller Center’s commitment to ecumenicalism and service to all of God’s people.

“We had an incredibly great experience last week, working in partnership with students from Wittenberg University as our Christian ministry made needed repairs to the home of a Jewish family whom we had learned about through a member of their synagogue,” Goodman said. “The synagogue member was a member of NARI (National Association of the Remodeling Industry) who knew Mark Galey through that organization, and brought the family’s needs to our attention.  Construction management students from Gwinnett Tech joined us to help supervise the project.”

“The homeowners (husband, wife, and two teenagers) worked alongside the volunteers all week,” Goodman added. “The husband, who has been employed in a low-wage job at Rite-Aid for more than 20 years, was able to take a week of vacation in order to be able to help, and the wife, who is a seamstress and works at home, also assisted with painting and repairs. I think I speak for the entire group when I say we did our very best to show God’s love in action, and I think the homeowners felt the love! The Atlanta Fuller Center appreciates the hard work of the Wittenberg students and looks forward to our future association with Wittenberg and other groups who are committed to helping improve living conditions for families in need.” 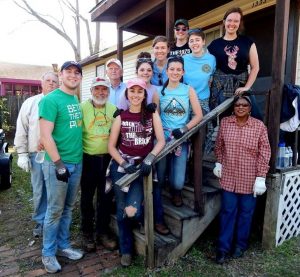 In Perry, eight students worked with local President Warren Johnson and two local volunteers — Coy Goff and Michael Boden — to repair the roofs of two elderly women, including Velma Robinson, who has lived in the same house all of her life.

“There are some good people in the world,” Ms. Robinson said as the students scraped off old shingles a day before replacing them with CertainTeed shingles provided by World Vision. “It’s a blessing for these kids to give up their free time to come help somebody like this when they could be doing something else. And I do appreciate them, very much.”

“We built two roofs but I think the best part is just the community that we’ve been hanging out with in Perry,” student Becky Schmitthenner said. “It was a great way to spend our spring break instead of just partying on a beach. It was so meaningful.”

Jenn Downing also worked with the Perry Fuller Center during her 2016 spring break. She could have headed for the beach this year but instead chose to be a team leader and return to Perry.

“This is so much more rewarding,” she said. “You’re still with your friends, you get to meet amazing people in a new place and you know that someone benefits from what you’re doing. It’s an amazing feeling.”

Fuller Center Director of Communications Chris Johnson said the students’ visit helps the small-town covenant partner garner media attention (including this front-page centerpiece photo in the Macon Telegraph), renews the energy of local volunteers and enhances relationships with church partners, including First Baptist Church of Perry, which hosted the students in a vacant house on its property.

Perry’s Houston Home Journal newspaper published an
article about the students’ work that you can read at this link.

Chris Johnson, a columnist for the Columbus Ledger-Enquirer,
used the students’ visit as inspiration for his latest article. 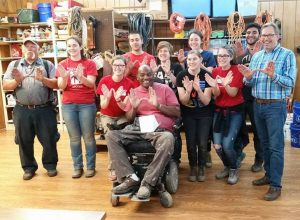 In Americus — also home to The Fuller Center’s international headquarters — the students worked on a couple of different projects, including restoring a donated home to decent condition and helping transform a space above the Americus-Sumter Fuller Center’s headquarters into a transitional housing space.

“I got here thinking that we were just going to be painting and flooring, and then they showed us this place and told us we would be building an apartment,” Jessica Skoglund said. “Seeing this entire apartment come together has been the best experience I’ve ever had on a mission trip, honestly.”

Rachael Fink appreciated being able to work alongside people like Thad Harris, an Americus-Sumter Fuller Center homeowner partner who also has become a local board member and one of The Fuller Center’s most prolific volunteers, inspiring hundreds of people while rolling around job sites in his wheelchair.

“Ive learned so much about the community and I’ve absolutely loved hearing stories about the people who work with the Fuller Center,” she said. “It’s just been an incredible experience. You can’t make a difference without knowing the story and knowing other people’s backgrounds.”

You can view multiple slideshows of the students’
work on the Americus-Sumter Facebook page. 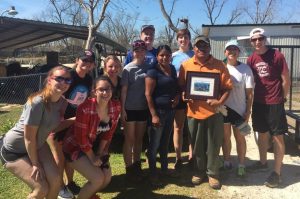 In Albany, students saw the widespread damage caused by two bouts with January storms, the second of which spawned a devastating tornado.

While helping Ricardo Miguel’s family repair damage to their storm-damaged mobile home, the Wittenberg students also helped put a major initiative on the map, sparking media coverage of Albany Twin Storms Relief. Also known as “A2,” it is an effort to help families affected by the storm who lack adequate housing insurance or who have been overlooked by FEMA efforts. The Albany Area Fuller Center is a primary partner in the effort.

“This is amazing,” Miguel told the Albany Herald newspaper. “It is amazing to know that there are people in your community willing to help out when things are bad. I am overwhelmed.”

Speaking to WFXL-TV, Metta Devine-Quin said, “It’s a lot of damage. I have seen it before, and I sympathize with all of the people down here. Anything that we can do to help them, I just want to be able to do anything I can.”

See the complete story in the Albany Herald newspaper. 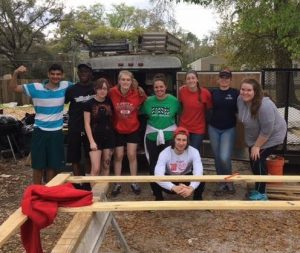 In Tallahassee, Florida, students worked on five homes in a low-income community. Though most had little to no construction experience, they learned that it’s the passion for helping others that makes a difference.

“What I learned was that regardless of your previous skills, anyone can contribute anything to any cause, so that was a really rewarding experience for me,” Alex Quillin said.

Their efforts not only improved homes in the area, but they provided inspiration and hope for the residents — including some of the youngest residents.

“I was not expecting it to be this amazing,” Lydia Newton said. “We met a little girl who was living in a trailer. She was helping me and she told me she wanted to be like me when she grew up. She wanted to wear the apron and the gloves and help out and make a difference. It was really amazing.”

Your donations make
these projects possible

Experience team-building like
never before on a U.S. Builders trip