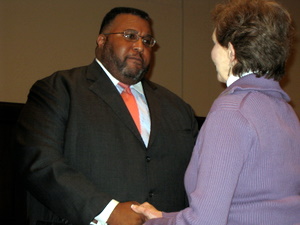 Davis received one of the first homes when the Fuller Center covenant partner formed there after Hurricane Katrina sent many fleeing to Shreveport for higher ground.

Around the same time her son contracted meningitis, beginning the final few months of his life.

"There was a storm in New Orleans, but I felt like right here in town I was going through a storm," she said, describing the months in 2005 while her son was dying and her new home was being built.

"I am so grateful that someone gave me a chance to be a homeowner. It helped change my life. I started loving more, I started helping more," she said. The home was completed in time for her son to see it.

More than 80 Fuller Center friends across the nation gathered in the same area where Davis’ life changed to share ideas and learn more about building homes for those in need in their own communities. Friday featured workshops on topics like green building, hosting work teams, partnering with local organizations and broader Fuller Center programs.

President David Snell and co-founder Linda Fuller are in attendance and will both be presenting Saturday.

"I feel like I’m at home in this town," Snell said.

It’s familiar ground for many at the conference. Shreveport is where The Fuller Center first built homes within the United States and it’s one of three locations in Louisiana where the fifth anniversary will be celebrated in March.

But this weekend, conference attenders continued their exchange of ideas with a full day of workshops on social media, fundraising, disaster preparedness and response, as well as a tour of Allendale–where many Fuller Center homes reside–and details on upcoming events like the Millard Fuller Legacy Build 2010.

Be sure to check out the video of Lee Jeter, Executive Director of The Fuller Center of Northwest Louisiana describing what’s coming up for his organization.