After 2,500 miles biked, hundreds of people visited and nine homes improved along the way (in addition to many others helped through thousands of dollars of funds raised), the Fuller Center Bike Adventure came to a close–with a big party in New Orleans.

The weekend was full of excitement for the 11 riders who entered New Orleans Thursday. 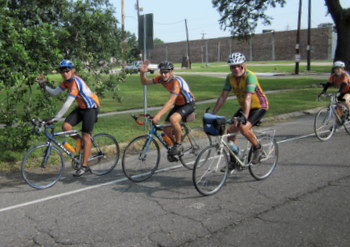 “It’s been one of the best summers of my life,” Kyle Halat, a whole-way rider who experienced all 50 days and 13 states, said. “I got to meet some great people–riders and homeowners.”

Louisiana is a special place for the Fuller Center because it’s where, five years ago, the Fuller Center first began building domestically. Homes were built for Katrina victims who fled to Shreveport, La. seeking higher ground. (Find out more about that here.)

Friday was the final of the Bike Adventure’s six build days, this one in Belle Chasse, where Delores Black’s home was dedicated after the bikers put some finishing touches on it (read more and check out some news coverage of that here).

Like so many others, Black lost her home when Katrina caused the Mississippi River to flood across a levee into her neighborhood. She and the Bike Adventure celebrated endings and beginnings together with an all-out dedication celebration Friday night.

After enjoying all the local cuisine they could desire, the riders woke Saturday morning to hop on their bikes one last time for a tour of the city with a local bike club. 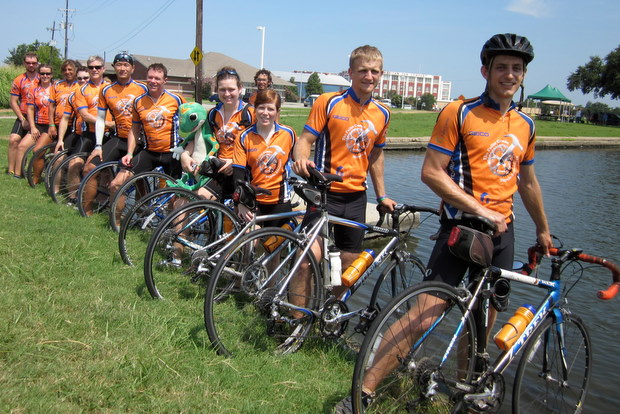 They ended in a local park where they were treated to alligator burgers and Fuller Center Co-founder Linda Fuller presented them with medals. Fuller Center president David Snell also spoke.

“Once people find out what the Fuller Center is doing, they’re interested,” Snell said to the riders. “You’ve spread the word near and far this summer, and we’re grateful.”

Ryan Iafigliola led the Bike Adventure each year since founding it in 2008. Next year’s trip from Washington state to Washington, D.C. will be led by volunteer Allen Slabaugh, though Iafigliola will still be involved.

“I wish we could gather all the riders who took part in this ride together because there are so many stories,” Iafigliola said. “The entire ride is a story. And it’s all part of a larger story.” 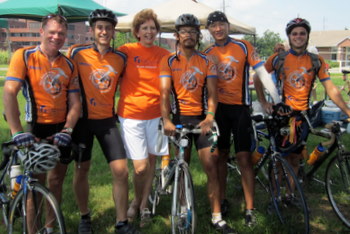 The weekend also included a tour of New Orleans where riders were able to see some of the devastation left by Katrina as well as some successful rebuilding that’s taken place since. And Saturday night featured one final celebration to help the riders reach their $250,000 fundraising goal.

A concert was held at the Howlin’ Wolf venue featuring well-known local musicians, red beans and rice and more. Find out all the details here.

Follow more of the Bike Adventure (including stories, photos and videos) in it’s final moments: click here for the blog.