Here is a sampling of more than 100 families with whom we are partnering during the 2011 Millard Fuller Legacy Build: 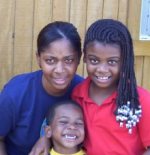 Uanya Shine: New home recipient with her daughter My’ya age 7 and her son Jaylen age 4. Uanya works at a fast-food restaurant in Bossier City (25 miles away), and she has been a most responsible parent in providing for her children and herself. But the house in which they live is what Millard Fuller described as a “shack.” It has been in the family for many years, but the condition is such that Uanya and her children were quickly selected by the Fuller Center of Webster to partner in the Millard Fuller Legacy Build 2011.

Shanika Harris: Shanika Harris is the mother of two young sons — Aaron and Andrew. Caring for and raising these two young boys is a challenge for Shanika. And her situation is compounded by the fact that they live in a mobile home that is in terrible condition. Plumbing leaks, sagging floors, cracks in the wall, and a leaky roof are just some of the unacceptable conditions in this residence. Shanika has proven her commitment to her partnership with the Fuller Center of Webster Parish by accomplishing almost all of the required 500 hours of sweat equity.

Emma Quarles: Emma is 92 years old and still maintains her own home. But it is in deperate need of insulation, repair of leaks and outside paint. She looks forward to being able to stay in her home for many years to come but needs help in making these repairs.

Malone home: Berrien County’s first-ever Fuller Center project will be the home of a hard-working Berrien County woman who owns her own home but has lost home insurance because of the poor condition of her roof. Berrien County Fuller Center Chairman Dan Teich describes Debra Malone as “a very compassionate lady who herself understands giving.” “She works for Comfort Keepers (which helps seniors continue to live independently in their own homes) and has a tenant living rent-free in the downstairs of her house while they get back on their feet,” said Teich, senior engineering manager at Whirlpool Corp. in Benton Harbor, Mich. “The roof was patched a few years back but needs to be re-roofed.”

Gyozalyan family: Laura Gyozalyan, 33, daughter Susan, 16, and son Karen, 15, have been selected as a partner family. Work began on the home earlier this year and is closing in on completion. After years of living in a relative’s home, the family set out to build their own house in 2008. But after running into financial problems, the father left to work in Russia in hopes of keeping the family financially afloat and the dream of owning their own home alive. However, he died unexpectedly while in Russia. Laura was left to raise her two children alone, while her in-laws assist the family. The family’s main source of income is farming. They grow strawberries and have a garden next to their unfinished home, but it hardly generates enough money to raise two children and complete the house. Now, she and the children hope to see the father’s dream come to fruition by teaming up to work alongside local and international volunteers to finish a project that was begun by the Fuller Center this past spring.

Ghazaryan family: The Ghazaryan family of four lives in a relative’s house. The owners of the house, being out of country now, have let them live in their house until they finish the construction of their own house. Soon after marriage they lived together with Karen’s parents. When Karen’s younger brother married, they had to move to another place, as the family was extended and there was not enough space for everyone there. Like most of the Armenian families, Karen, being the eldest son of the family, had to live separately. Karen is a carpenter at wood manufacturing factory in the village. They are also farming and planting vegetables and fruits. They’ve heard about Fuller Center for Housing Armenia from their neighbors and applied for our project. “This is the only way we can finish the partly constructed house of ours, which my father has bought for my family. Thanks to our parents and FCHA we can now move ahead”, says Vardush, the mother of the family.

Avetikyan family: Vrez and Naira and their three children — Samson, Vahe and Vahan — live in an 18-square-meter metal container they purchased from a villager soon after the couple’s marriage in 2000. Vrez had lived with his parents before. There were 2 other boys in the family of his parents except him and knowing they had to move anyway, they decided to start their life separately from the beginning. After having children, they could see all inconveniences of the metal container. The severe cold in winter and unbearable hot in summer, zero bathroom utilities, limited space for children to study the lessons were making more and more troubles for the family. Beyond that, one of the twins was born weaker, and they had to pass a lot of time in the hospitals. Vahan is disabled and gets stipend for disability. Naira is a teacher at the local school. Vrez is a driver. They are at the same time farming and planting. Still they would never be able to construct the partly constructed house on their own. Finally they’ve applied to FCHA with the desire to complete it with our help and assistance.

The Rajam family: Deserted by her husband, Susan Rajam has two school-aged children and lives with her widowed, ailing mother in an old tile-roofed house also occupied by her brother’s family. Susan is working as a temporary teacher in a local primary school. She wants to be secure in a house of her own. The Fuller Center has helped her to build a modest house on her own small piece of land. Construction is in the final stage.

Kumar family: Sheeba and her family consisting of her husband, daughter and her parents are living in a substandard, absbestos-roofed unhealthy house built long ago. The family could erect only the foundation with the meager grant they received from the local government. The family then approached the Fuller Center for further assistance. The board visited the house and assessed the condition and need. Sheeba works as a pharmaceutical agent, while her husband Ambili works as a camera assistant for a television producer. Construction will soon be complete.

Saji T. and Jini R. (no photo available): Saji and Jini live with their two small school-aged children in a dilapidated house built more than 50 years ago. Saji is an experienced carpenter who makes adequate wages for his family. The family procured some of the building materials.

SRI LANKA
Richard family: The Richard family fell on hard times when the father of the family, L.G., wasn’t able to make ends meet with his job as a private security guard. The family has been living with L.G.’s parents for several years in Willorawatte, Moratuwa, Sri Lanka. The one-room home has no doors or windows and very limited space for its six inhabitants. They’ve had plans to build a room adjoined to his parents’ home but have never been able to execute these due to limited funds and resources. After many years of waiting and saving, they reached out to The Fuller Center for Housing of Sri Lanka, which approved the family’s application.

Gunathilake family: For many years, the Gunathilake family has lived in a small house in Alubomulla, Panadura, Sri Lanka, that they built several years ago. The home was never completely finished due to a lack of funds and resources, so the family has been living without doors or windows. Recently, they reached out to the Fuller Center for Housing of Sri Lanka, which approved the family’s application. Volunteers will install new walls, doors and windows on the home during the 2011 Millard Fuller Legacy Build.

To donate to the 2011 Millard Fuller Legacy Build, click here.

To learn more about this year’s Legacy Build, click here.