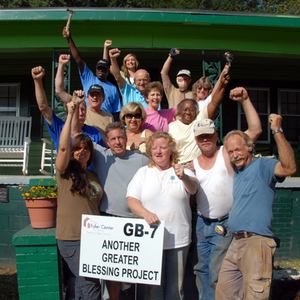 Millard Fuller had a vision that began a movement to end poverty housing. And 30 years later 300 people, motivated by their own visions and inspirations, celebrated Millard’s legacy by taking a step toward accomplishing his dream—giving a week of their time to help ensure 14 families in Lanett, Ala. now have a decent place to live.

The dedication service was held for those 14 homes today, featuring the words of the mayor of Lanett, many of the homeowners, Fuller Center president David Snell and Millard’s wife and co-founder of the Fuller Center, Linda Fuller.

All homeowners are residents of Lanett, Ala., the town Millard himself grew up in. Latishia Booker, Lisa Trammell, Latasha Billingslea, Gresham Brooks, Shakeil McCants and Marilyn Loyd received the keys to their new home along with Bibles and a handmade quilt at the service.


Brooks was in tears when she stood up to thank the gathered volunteers.

“Millard Fuller planted a seed and he nurtured it. He watered it and he cared for it,” Brooks said. “And this is what it came out to be: A harvest of good people and a home.”

Besides the six new homeowners, eight others had their newly renovated homes dedicated and received Greater Blessing boxes. 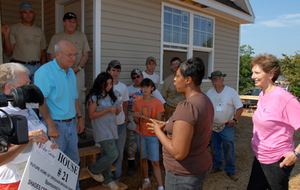 Snell and Linda presented the gifts. But first Linda addressed the crowd, thanking them for their hard work and time. And she spoke of her husband Millard.

“Millard wanted so much to be here—this was his hometown, it was his idea for this whole week,” she said. “There’s no doubt in my mind that his presence has been felt strongly this week and is here now.

“We want more and more people to catch the enthusiasm, to be inspired by wonderful families, the homeowners. There are so many partners that are waiting for the opportunity to have a decent place to live,” she said.

Snell reminded volunteers of the many others around the world building and dedicating homes as part of the Millard Fuller Legacy Build.


“You are in the Vortex where all of this energy is surrounding you,” he said. “There are folks out there celebrating with you. God bless them and God bless you.”

Project coordinator Bill Scott, new construction coordinator Darren Kelley and Greater Blessing project coordinator Seth Kujat received numerous accolades for their work and they each addressed the crowd of homeowners, their families and volunteers. “My energy is spent,” Kujat said. “It’s like the fourth quarter in a football game. But if we had to play another game in an hour, I’d suit up with you. Thank you for making this an amazing week.”

At the end of today’s ceremony, the torch was passed from the Chattahoochee Fuller Center Project to The Fuller Center Indianapolis, the host of next year’s 2010 Millard Fuller Legacy Build.

“We’ll have a wonderful time next year in Indianapolis,” Snell said. “You have set a high standard. This is one of the finest building events I have attended and I have attended many. Oyee!”