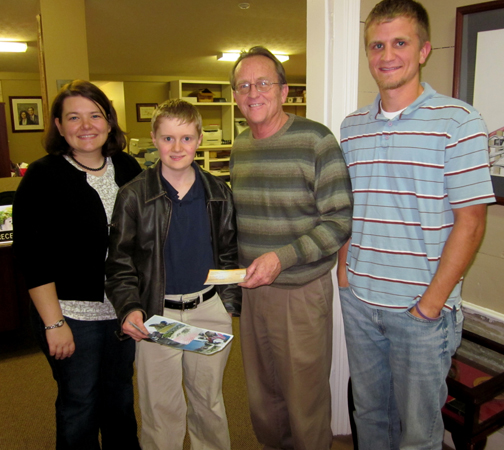 Two years after the devastating earthquake that struck Haiti, the disaster has fallen off the radar for many people. But there is still plenty of need, there are many groups like The Fuller Center for Housing who are helping Haitians recover and there remains a strong contingent of people who care about what’s going on in the Caribbean nation.

Count Americus, Ga., resident Peter Nordwall among those concerned parties. The 12-year-old student at Sumter Middle School and member of Americus Mennonite Fellowship came up with a sweet idea to help The Fuller Center partner with Haitians to build simple, decent, affordable housing.

He decided to make and sell caramel popcorn. Obviously, it was a hit. After a couple of weeks of work, Peter was able to come to The Fuller Center for Housing’s headquarters in Americus to present a check for $103.50 to Fuller Center President David Snell.

“In a world with so much news about naughty things kids are up to, it is refreshing to meet a young man with a heart, one like Peter Nordwall, who decided he wanted to help the poor folks in Haiti and created his own fundraising project,” Snell said. “There is hope for the future, and it rests with people like Peter who are touched by the hardships of others and look for ways to make things better.”

Of course, it’s a generosity that runs in the family of Fuller Center supporters, including Peter’s mother, Susie Nordwall. Susie will be riding the final segment of the East Coast portion of our Fuller Center Bicycle Adventure (from Daytona Beach, Fla., to Key West, Fla.), raising money for and awareness of The Fuller Center’s mission.