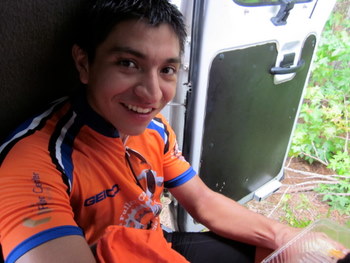 Welcome Steve to the Fuller Center Cyclists. And, what an inauguration for him.Today we did a 107 mile bike ride from Spartanburg to Columbia, S.C. We cycled through sun, humidity and 93 degree temperature, through rain, and through thunder and lightning. We are lucky its doesn’t snow this time of year!

We had a 5:30 wakeup call and departed sometime around 7 a.m. By 12:30 we had already cycled 70 miles. We were all on fire….maybe that’s why we were sweating so much. But, then the rain and thunder hit. We continued to cycle through it until it began to come down in buckets.

Four of us sought refuge under an overpass. While we were there, we were treated by that Southern Hospitality once again. An elderly gentleman stopped his car to give us two small rags to dry ourselves off with. We were so drenched, the rags wouldn’t have been of any use. It’s the thought that counts.

Once we reached the 90 mile mark, our GPS system directed us another way. I guess it was saying that we were on a "virtual road." It started pouring once again, so we kept dry all scrunched up i 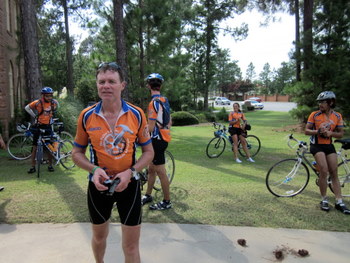 n the van while Ryan, Aaron and Kyle tried to figure out how to get to our destination.

We ended up all following Kelli (the driver) in the van until we arrived at Tammie Collins’ home. We were welcomed with open arms, hot showers and a fantastic chicken dinner. They even offered to do our laundry. Thank goodness. Our jerseys and our socks were all soaked.

Bedtime early tonight since we have a wakeup call at 5 a.m.

Here’s a clip from the party in the van held to avoid a brief downpour. For some reason Aaron did not join. Though we promise he was invited.